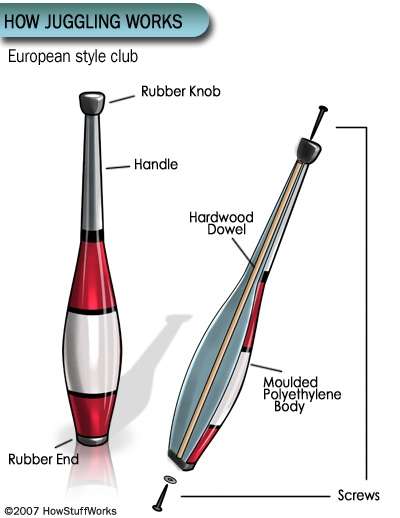 Clubs are probably the second-most-common juggling prop behind balls (or bean bags, which are often lumped into the same category). To juggle clubs, a juggler will usually rotate the club with each toss. Tossing and catching a club after one full rotation is considered a single flip. Doubles, triples and quads are tosses that include multiple flips (two, three and four, respectively). It's also possible to catch the body of the club with a half rotation. Jugglers can toss the club from one hand to the other without rotating it at all, which is called floating the club.

Clubs come in several styles, though the two most common are European and American. European clubs have a narrower body and are very popular among professional jugglers. For one thing, it's much easier to recover after a bad spin with a European club, and it's easier to catch it by the body and give it a half or one-and-a-half spin on the next toss. The Juggling Information Service Committee recognizes a record of nine clubs or sticks juggled at once.

Some props are easier to juggle in large numbers than others. Here's a brief list of the more common juggling props and how they translate into numbers juggling.

Several common juggling props are closely related to clubs. These include knives and torches, as well as other unorthodox juggling props such as axes and chainsaws. Obviously, with these items it's more important for a juggler to make sure he catches the object by the handle. Most of these dangerous items are designed in such a way as to minimize injury should a juggler mistakenly under- or over-rotate a toss.

Rings are also common juggling props. A ring is a circular hoop, usually at least a foot in diameter. Rings tend to have very stable flight paths due to a gyroscopic effect. It's easier for a skilled juggler to manipulate a greater number of rings than other objects. The official record for the most rings juggled at once is 13, though some claim to juggle as many as 14. Jugglers can throw more than one ring at a time from the same hand with relative ease -- throwing multiple props at the same time from one hand is called multiplexing.

Another popular form of juggling takes place in bars. Bartenders specializing in flair juggling, manipulating bottles and cocktail cups in flashy displays of dexterity and showmanship. Bartender flair can involve toss juggling, bounce juggling and twirling displays, among other techniques.