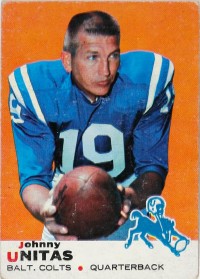 Johnny Unitas was cut by the Pittsburgh Steelers before he even got a chance to throw one pass in a preseason game. The Steelers' ninth-round draft pick from the University of Louisville then played semipro football with the Bloomfield (Pennsylvania) Rams for $6 per game when Baltimore Colts coach Weeb Ewbank decided to take a chance on the kid with the crewcut. He signed him to a $7,000 contract.

Unitas (born 1933) got his second break when injury sidelined Colts starting quarterback George Shaw in the fourth game of the 1956 season.

Hoping to make the most of his opportunity, "Johnny U" got off to a rocky start when his first pass as a pro was intercepted.

A lesser man might have hung his head and quit, but not Unitas. He finished the game with his head held high, and within just a few seasons he was being hailed as pro football's "living legend."

Unitas, the NFL's three-time Most Valuable Player, accumulated almost unbelievable statistics during his 18-year career with the Colts (1956-1972) and San Diego Chargers (1973).

But without a doubt, it's for his heroic performance in the 1958 NFL title game, often referred to as the "Greatest Game Ever Played," that he is best remembered.

His tying and winning drives were textbook-perfect examples of what it takes to win under pressure. Late in the game, with the Colts trailing the New York Giants 17-14, Unitas completed seven straight passes.

That set up the game's tying field goal with just seven seconds left. He followed that All-Pro performance with a perfectly executed 80-yard touchdown drive in overtime to win.

In 1979, with his election to the Pro Football Hall of Fame, Johnny Unitas completed his climb to the top, proving that sometimes all that is needed is a chance to play.