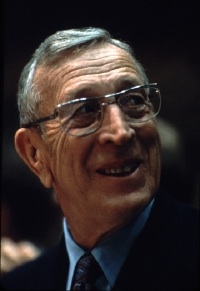 ©UCLA Athletics Department John Wooden was the first person to be inducted into the Hall of Fame in more than one category. See more pictures of basketball.

Coach John Wooden built a basketball dynasty at the University of California-Los Angeles, winning 10 NCAA championships, including seven in a row from 1967 through 1973. Before that, Wooden was a three-time All-American at Purdue University and the national Player of the Year in 1932, when the Boilermakers won the national championship. The first person ever inducted into the Hall of Fame in more than one category, Wooden was enshrined as a player in 1961 and as a coach in 1972.

Wooden's coaching staples were a 2-2-1 zone press; crisp, fast-breaking offense; and poise under pressure. He was a master of adjustments. When Lew Alcindor (now Kareem Abdul-Jabbar) joined the UCLA varsity in 1966, Wooden overhauled his offense and defense to maximize Alcindor's prodigious talent. Alcindor led the nation in shooting accuracy twice in the next three seasons and the Bruins won championships each year. Wooden had a style that has all but disappeared from modern basketball, as Nelson George described in Elevating the Game: "Wooden never swore, wrote bits of optimistic poetry, and believed in a pyramid of success he used as a guideline for living...He looked and talked like a genial high school history professor."

Born October 14, 1910, in Martinsville, Indiana, Wooden graduated with honors from Purdue in 1932 and began a teaching and coaching career at a high school in Kentucky. Two years later, he returned to Indiana to coach basketball and other sports at South Bend Central High School. He served in the U.S. Navy from 1943-46, then went to Indiana State as athletic director and coach. In 1948, he left for UCLA, where he immediately led the Bruins to the first 20-win season in school history.

Wooden stayed 27 seasons at UCLA and never had a losing record. He guided the Bruins to 88 consecutive victories from 1971 to 1974. More than two dozen of his players saw action in the NBA, and three -- Abdul-Jabbar, Bill Walton, and Gail Goodrich -- were elected to the Hall of Fame. Four of his teams finished with 30-0 records. He went out on top, retiring after winning his 10th national championship in 1975.

In 2006, he was a member of the inaugural class of the National Collegiate Basketball Hall of Fame, along with Oscar Robertson, Bill Russell, Dean Smith, and James Naismith.