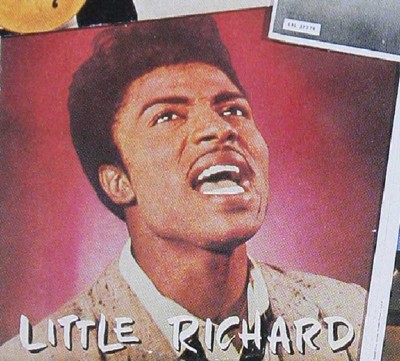 An LP of Little Richard, one of the major American artists who influenced John Lennon.

The emergence of Elvis Presley had been only the beginning, and within a very short space of time John Lennon, like most other British teenagers of the 1950s, was also listening to the sounds of the Americans Little Richard, Chuck Berry, Jerry Lee Lewis, Carl Perkins … and a Britisher named Lonnie Donegan.

In Britain, Donegan was the man who brought a new form of popular music to the masses. When his 1954 cover version of the old Huddie "Leadbelly" Ledbetter song, "Rock Island Line," suddenly became a hit in January of 1956, it started a craze among teenagers for his particular brand of music, called "skiffle." A crude blending of folk, jazz, and blues, it was not so much the quality of the skiffle sound that caused a sensation, but more the ease with which that sound was produced.

The Lonnie Donegan Skiffle Group featured drums, upright double bass, and two guitarists. Donegan took the lead, playing a basic three-chord style, and performed the whining, nasal-sounding vocals. In 1956 and '57 he enjoyed a succession of hits with "Putting On The Style," "Cumberland Gap," and "Don't You Rock Me Daddy-O." Donegan later charted in America with "Does Your Chewing Gum Lose Its Flavor (On the Bedpost Overnight.)" The less-than-sophisticated skiffle sound was cheap and easy to duplicate, and within a short space of time thousands of skiffle groups sprang up all over Britain.

The most difficult and expensive instrument to acquire was the double bass, and so for this the kids improvised. A broom handle would be poked through a hole in an upturned tea-chest, and a length of cord then run between the two, producing an instant "tea-chest bass." Percussive rhythm, on the other hand, would be provided by someone strumming thimbled fingers up and down on an old washboard.

This was it -- do-it-yourself rock 'n' roll! John wouldn't even bother dreaming about trying to match the god-like Elvis, but here was something that was well within his grasp. Now, all he had to do was persuade either his Aunt Mimi Smith (who raised him) or his mother Julia to buy him a guitar; no easy task. Mimi, of course, was dead set against any ideas he might have of imitating the "vulgar" Presley, and Julia didn't want to undermine her sister's authority.

The solution was for John himself to send off for an ultra-cheap mail-order guitar -- "guaranteed not to split" -- and have it posted to Julia's address. The following year, 1957, Mimi would relent, and buy him a better guitar just so that he would "get it out of his system." In Philip Norman's Shout! The Beatles in Their Generation, Mimi remembers that she'd send John outside the front door to practice: "He stood there leaning against the wall so long," she recalled. "I think he wore some of the brickwork away with his behind."

Julia, who could play the banjo, set about teaching her son some of the chords that she knew, and soon the aspiring star was belting out his version of "Rock Island Line" and searching around for fellow musicians to form a band.

He didn't have to look far. At school, Rod Davis had recently purchased a banjo, while Eric Griffiths already had a guitar and knew Colin Hanton, an apprentice upholsterer with a new drum kit. Other friends, such as Bill Smith, Nigel Whalley, Ivan Vaughan, and Len Garry, alternated on tea-chest bass, and the washboard was taken up by none other than John's longtime friend Pete Shotton.

After initially naming the group the Blackjacks, John then settled on the Quarry Men, in surprising reference to Quarry Bank Grammar and a line in the school song, "Quarry men strong before our birth." John made all of the decisions, of course, being the group's undisputed leader, dictating the songs that they perform -- solid rock 'n' roll favorites, such as "Let's Have A Party" -- and taking care of all the lead vocals.

The group's first rehearsal took place at Eric Griffiths's house. So far, so good, but their first audition -- in which they failed to qualify for a TV talent contest -- was a dismal failure, and their first public performance was on the back of a coal truck, at a carnival in Rosebery Street, Liverpool, on June 22, 1957.

Not the most auspicious of beginnings. Regardless, other modest engagements were secured, and for the most part the ever-reliable Julia allowed rehearsals to take place at her home. She would tune Rod Davis's banjo and John's guitar similarly, with the result that John would play banjo chords using just the top four strings of his guitar. It was this peculiar style that initially gained the attention of 15-year-old Paul McCartney, when he saw John for the first time at a garden fete, in the field behind St. Peter's Church in Woolton, on July 6, 1957.