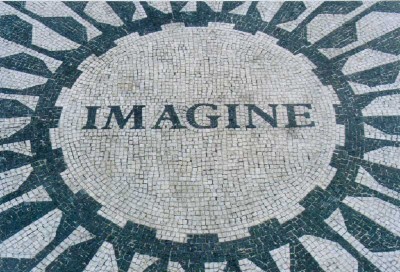 ©
The mosaic centerpiece of the Strawberry Fields section of New York's Central Park says it all.

In a 1987 interview, Beatles' record producer George Martin said, "As far as the music was concerned, John Lennon was always looking for the impossible, the unattainable. He was never satisfied.

"He once said to me, in one of our evenings together when we were reminiscing, 'You know; George, I've never really liked anything we've ever done.' I said, 'Really, John? But you made some fantastic records!' He said, 'Well, if I could do them all over again, I would.'"

Few, it appears, tend to agree with John's view about his own work, and since his death his records -- those he did with and without the Beatles -- have continued to sell in vast quantities around the globe.

The purchasers have been a mixture of the old and the new: faithful fans, replacing worn-out copies with vinyl, tape, or compact disc; and a generation of younger people who have come to hear and appreciate John's music for the first time.

What they listen to is the work of a singular talent, a man who composed songs -- great songs -- in styles spanning the whole range of popular music, and that provide not only tremendous enjoyment but also great insight into John's thoughts and experiences.

The techniques employed in many of the earlier recordings may now sound dated, but the performances themselves are timeless, as fresh and as full of energy, heart, and soul as when John and his colleagues first worked on them.

Since 1980, there have been countless attempts -- made, more often than not, by members of the press and other media -- to either deify or vilify John; all have been wildly inaccurate. John, as he himself was always the first to admit, was by no means an angel, and he would have had little time for those who have set him up as some kind of a god.

He had enough trouble putting up with that during his lifetime, and he always urged people, both through his spoken comments and through his music, to pursue their own dreams and not rely on leadership figures. As he expressed it in the song "I Found Out" in 1970:

"Now that I showed you what I been through Don't take nobody's word what you can do There ain't no Jesus gonna come from the sky ..."

But if John was no god, neither was he the devil that cynical biographers and other people would have him be. His extraordinary talent aside, John was in most respects just a regular human being, with strengths and weaknesses like anyone else.

Many of the things he did wouldn't have won him any medals for socially acceptable behavior but, as those who really knew him always confirm, his good points -- his honesty, his generosity, his sensitivity, his wit, and his lack of conceit -- far outweighed the bad.

Inevitably, though, a person who is not around to defend himself is easy meat for the cash-in merchants and rumormongers. Some of the John Lennon stories that have surfaced since his death are emphatic enough to have booked him a permanent place in either Heaven or Hell.

At the same time, what many of the tales have lacked in offensiveness they have made up for in sheer stupidity. One story involved a woman who claimed to have been contacted by John from beyond the grave in order to write more hit songs on his behalf.

Another one revolved around a pet parrot called Sergeant Pepper, who (his owner claimed) had once been owned by John and had memorized some of his unreleased compositions.

The feathered birdbrain, which had apparently been purchased by the human one for a mere $400,000 at auction, was happy to squawk its way through 20 never-before-heard Lennon masterpieces, and these noises were being written down as sheet music by a self-styled composer.

The result was to be an album of orchestra music, entitled The Lost Works of John Lennon. The world is still waiting!

In all, John has proved to be as big a business property in death as he was in life. But unlike other music celebrities who met sudden deaths, he did not need to die in order to provide a boost to his career.

During his last few months he gave the world a healthy taste of his unique talent. He was cut off during a period of intense creativity, one signaling that he still had many more years of valuable music to offer his public.

While we had the opportunity to enjoy only half of John Lennon's potential life's work, and are likely to wonder what the second half may have brought, such speculation is frustrating and, in the end, useless.

What we do know is that the inheritance we have been left is rich in both quality and quantity, and can be shared by all people and passed on, intact, from generation to generation.

Shortly before his death, in a Playboy interview in which he reflected on years of challenge, celebrity, and creativity, John said, "I've done more in my life than most people would do in ten." He was absolutely right. The man has gone, but his music is immortal.