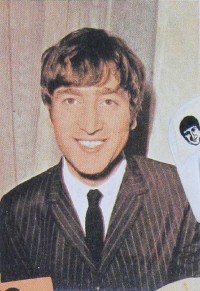 Despite his significant solo work, John Lennon would always be remembered as a Beatle.

Aunt Mimi Smith -- who raised John Lennon -- Paul McCartney, George Harrison, and ex-wife Cynthia and son Julian Lennon were awakened from their sleep to be informed of the tragic assassination of John, while in America some television and radio broadcasters openly cried on the air as they broke the news to a stunned nation.

On December 10, John's body was cremated, and at 2:00 p.m. EST on Sunday, December 14, some 400,000 people gathered in New York's Central Park to join the rest of the world in ten minutes' silence for his memory. "John loved and prayed for the human race," said Yoko. "Please do the same for him."

"Mahatma Gandhi and Martin Luther King are great examples of fantastic non-violents who died violently," John had asserted just three months earlier to Playboy's David Sheff. "I can never work that out. We're pacifists, but I'm not sure what it means when you're such a pacifist that you get shot. I can never understand that."

Nobody could. In the Soviet Union, the newspaper representing the Communist Youth League stated that it was "a bitter irony that a man who devoted his songs and music to the struggle against violence, should become a victim of violence."

In America, a fan named Jon Grabill wrote a letter to Rolling Stone magazine, observing that "We've come a long way in seventeen years, from shooting presidents to murdering musicians."

In the White House, President Jimmy Carter said, "John Lennon helped create the mood and the music of the time," while the Beatles' New York concert promoter, Sid Bernstein, described John as "the Bach, Beethoven, the Rachmaninoff of our time."

"It was a staggering moment when I heard the news," said Frank Sinatra, the musical idol of a previous generation. "Lennon was a most talented man and, above all, a gentle soul."

Paul McCartney, looking pale and drawn, told journalists, "I can't take it in. John was a great man who'll be remembered for his unique contributions to art, music, and world peace." George Harrison, meanwhile, said that he was "stunned. To rob life is the greatest robbery."

But for all the words of sorrow, praise, and anger, perhaps the most accurate assessment was that made by author Norman Mailer: "We have," he asserted, "lost a genius of the spirit."

A world normally divided in opinion was now united in its grief and condemnation of such a violent ending for a man who had preached love and peace, and given hope and pleasure to millions. For one brief, poignant moment, John Lennon's dream of global unity had come true.