The Assassination of John Lennon 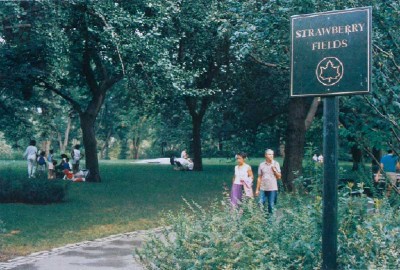 ©
Yoko Ono instigated efforts to create Strawberry Fields to commemorate John Lennon's life and work after he was shot to death.

On December 8, 1980, John Lennon had signed an album for Mark David Chapman while Lennon fan/friend Paul Goresh took photos. At around 8:30 p.m., Goresh decided to go home, but Chapman urged him to stay.

"I said, 'What for?' and he said, 'Well, something might happen and you might never see him again, and then you won't get his autograph.' I said, 'Listen, I don't need to wait for John's autograph, I speak to him all the time.

And besides, what's going to happen?' He then realized what he'd been saying and he kinda pulled himself together and said, 'Oh well, I was just thinking that he might go to Spain tonight or something!'"

Mark Chapman would later be diagnosed by psychiatrists as a paranoid schizophrenic -- someone who had come to imagine that he himself was John Lennon, and who was only prevented from assuming this role on a full-time basis by the existence of the man himself.

Others assert that he was simply a madman looking to make a name for himself, and there has even been a wild theory in which Chapman is linked to the CIA -- a hit man hired to do away with a re-emerging star who had caused political unrest in the past.

Whatever the truth of the matter, when John returned with Yoko Ono at around 10:50 that night, Chapman was waiting for him in the shadows of the entrance archway. Instead of driving straight through this passage into the Dakota's courtyard, John and Yoko would often have the driver stop by the sidewalk so that they could greet fans as they walked in. On this occasion they did it once too often.

As they stepped from the car, Yoko following behind her husband, a voice called out "Mr. Lennon!" John, turning to see who was asking for him, was met with a barrage of gunfire as Chapman -- squatting in a combat stance -- emptied his .38-caliber gun and pumped four bullets into John's back and left arm. A fifth one missed.

John, amazingly, continued to stagger forward and up the steps into the office of the Dakota night man, Jay Hastings, still clutching the tapes from that evening's studio session. Eyes glazed, and with a look of total shock on his face, he said to Hastings, "Help me ... I've been shot ..." before collapsing face-first on the floor, blood pouring from his mouth and chest (some of the bullets had exited through the front of his body, creating seven visible wounds).

As Hastings helped Yoko tend to her dying husband -- covering him in his uniform jacket and removing John's glasses -- Chapman calmly stood on the sidewalk outside, reading a copy of his favorite book, The Catcher in the Rye. "Do you know what you've just done?" Dakota security guard Jose Perdomo screamed at him. 'Yes," came the reply, "I've shot John Lennon."

John's body was limp, his bones shattered, as police officers lifted him into a car. On the way to Roosevelt Hospital, Officer James Moran attempted to keep him in the land of the living by yelling, "Do you know who you are?" John moaned and nodded his head, as if to say "Yes," but he had no chance of survival.

A team of seven doctors labored to save him at the hospital, but Dr. Stephan Lynn later announced that he had been "dead on arrival," due to massive loss of blood caused by "a significant injury of the major vessels inside the chest." The official time of death was given as 11:07 p.m.

John himself would have been quick to spot the significant part that the number nine was now playing in his death just as it had during his lifetime: The combination of figures in 11:07 adds up to the magic total, the Roosevelt Hospital is situated on Ninth Street, and in Britain, where the time is five hours ahead of that in New York, he died just after 4:00 a.m. on December 9.