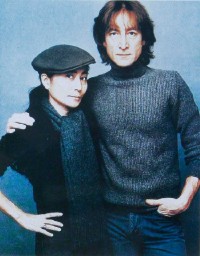 John Lennon and Yoko Ono intended to use one of the results of this November 1980 photo session for their Christmas card that year.

On the morning of December 8, sitting in the Lenono office at the Dakota, John Lennon, together with Yoko Ono, gave his last-ever interview. This was done for RKO Radio, in the presence of Dave Sholin, Laurie Kaye, Ron Hummel, and Bert Keane.

"I still believe in love, peace, I still believe in positive thinking," he told them. "You have to give thanks to God, or whatever it is up there, the fact that we all survived. We all survived Vietnam or Watergate or the tremendous upheaval of the world. ... The whole map's changed and we're going into an unknown future, but we're still all here, and while there's life there's hope."

A few days earlier, John had his hair cut in a style similar to that which he had sported as a Teddy boy all those years ago, and this is how he appeared in snapshots with the BBC team on December 6, and in the photos taken by Annie Leibovitz inside the Dakota throughout the afternoon of the 8th.

In some shots with Yoko, intended for the cover of Rolling Stone, he even posed naked once again. It was almost as if John had come full circle.

Meanwhile, Yoko's new song, "Walking On Thin Ice," was being mixed at the Hit Factory.

At around 4:15 p.m., as the two of them left for the studio, John was met outside the Dakota by fan-turned-friend Paul Goresh, who proceeded to show him some of the photos that he had recently taken of the couple.

Another fan, named Mark David Chapman, was standing nearby. Born in Fort Worth, Texas, but now living in Hawaii, Chapman had flown to New York with the specific aim of coming face to face with John Lennon.

Paul Goresh remembers, "I was on John's right, and he was looking at the pictures and asking me to bring some more shots that I had taken six days earlier. As we were in the middle of this conversation, Chapman came up on John's left and he just held the [Double Fantasy] album out.

"I didn't even hear him say anything. John turned and looked at him, and he was just holding the album with two hands, and John said, 'Do you want that signed?' and Chapman nodded. John took the album, and then he looked at me as if to say. 'What, can't he speak?' you know, 'This is strange,' but it didn't mean anything at the time.

"As John started to sign the album I just happened to have my camera ready, and so I stepped back and took a picture of him signing the cover; I didn't even want the other guy in the picture!

After that, I took a shot of John turning to Chapman, holding the album out and asking, 'Is that all right?' Chapman nodded, took the album and just backed away without even turning, and so in the next picture that I took John's eyebrows are raised, as if to say, "That's strange!'

Outside the entrance arch to the Dakota there is a small brass-colored booth, manned 24 hours a day by a blue-uniformed guard who opens the tall iron security gates for residents and their guests.

After John's car had driven away, Chapman pointed out to both the guard, Jose Perdomo, and to Paul Goresh, that he was placing his autographed album behind the booth. At the time, unfortunately neither Perdomo nor Goresh realized the cryptic, evil significance of this.

"I said to him. 'What are you putting it there for?'" recalls Paul. "And he said, 'Well, I'm just showing you guys where it is, because you'll want to know where it is later.' That's what he said. ..."