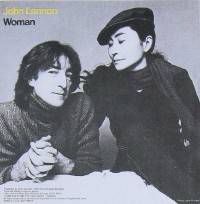 John Lennon intended the song "Woman" for all women, not just his wife, Yoko Ono.

After they resumed their commercial recording career on August 4, 1980, John Lennon and Yoko Ono went public again. They started giving magazine interviews, announced that they had signed a deal with Geffen Records, and on October 9, in celebration of John's 40th birthday and Sean's 5th, Yoko even went so far as to pay for an airplane to sky-write, "Happy Birthday John + Sean. Love Yoko,'' over New York City.

This followed the 500 fresh gardenias and diamond heart that John had given his wife, and the vintage Rolls-Royce that he had received from her, when toasting their 11th wedding anniversary at their home in West Palm Beach earlier in the year. The scene was one of domestic bliss, which was the underlying theme presented to the world when the Double Fantasy album was released in November.

The record contained seven tracks by John alternating with seven by Yoko, and to them it didn't matter if this arrangement didn't suit all ears. It was the only way that John wanted to work.

As he himself had put it during an RKO Radio interview on the last day of his life, "There's only two artists that I've ever worked with for more than a one-night stand, as it were: That's Paul McCartney and Yoko Ono, and I think that's a pretty damned good choice!"

John's songs reasserted his great musical talents: his versatility as a composer, his ability to communicate, and the strength and passion of his unique voice.

"(Just Like) Starting Over," the aptly titled first single to be released off the album, was a catchy pop number that borrowed some of its style and feel from the '50s, prompting John to refer to it as his "Elvis Orbison" track.

In "I'm Losing You," on the other hand, all of the old demons surface, with John -- his voice full of pain and aggression -- expressing his feelings of insecurity and isolation when staying in Bermuda, and unable to reach Yoko on the telephone. Clearly, however contented he now was, some things still never changed.

Yet this cut was an exception to the new rule, and the rest of the Double Fantasy material really describes how John was learning to come to terms with himself.

"It is the most violent people who go for love and peace." he told Playboy's David Sheff at around this time. "Everything's the opposite. But I sincerely believe in love and peace. I am a violent man who has learned not to be violent and regrets his violence."

John also felt bad about the way he had treated many of the women in his life; he often had adopted a tough stance in order to disguise his own insecurity. He told Sheff that he had been "trying to cover up the feminine side, which I still have a tendency to do, but I'm learning. I'm learning that it's all right to be soft and allow that side of me out."

So it is that John's song "Woman" opens with a quote from Chairman Mao, "For the other half of the sky," signifying that this love song is dedicated to all women, not only his wife:

"Woman, I can hardly express My mixed emotions at my thoughtlessness After all I'm forever in your debt"

Tender lyrics, an evocative melody and a wonderful vocal performance mark "Woman" -- which John referred to as the album's "Beatle track" -- as John Lennon at his very best. Three and a half minutes of pure magic, it was written by John in Bermuda in only 15 minutes.

John harkened back to the time in Bermuda with "Watching the Wheels," in which he describes his years spent as a homebody and househusband, while in "Beautiful Boy (Darling Boy)," a song directed at Sean, he muses:

John was interested in every stage of his young son's development, for as he said to Playboy's David Sheff: "He didn't come out of my belly but, by God, I made his bones, because I've attended to every meal, and to how he sleeps, and to the fact that he swims like a fish. ... I'm so proud of those things. He is my biggest pride, you see."

"Beautiful Boy (Darling Boy)," while concerning itself with Sean, also ends with a sentiment that turned out to be cruelly prophetic for John: