The Influence of Elvis Presley on John Lennon 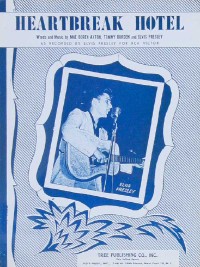 Sheet music for the song that redefined popular music in 1956, and inspired the next generation of rock artists. “Nothing really affected me until Elvis,” John Lennon would later say. “Without him, there would be no Beatles.”

Popular (and therefore white) songs of the early 1950s were invariably pleasant, a smooth voice crooning about the joys and heartaches of love, urging people to dance, or asking "How Much Is That Doggie In The Window?" Then, on May 11, 1956, a record entitled "Heartbreak Hotel" entered the British charts.

The song was performed by an unknown 21-year-old singer out of Memphis, Tenne­ssee -- Elvis Presley. The song's theme -- about the feelings of loneliness following the breakup of a relationship -- was nothing new in itself, but the morbid lyrics, harsh instrumental sound, and creepy atmosphere were something else entirely.

Clearly, since his "baby" left him, the singer had been suffering from a near-suicidal case of the blues, and he was now inviting the listener to join him in his misery and self-pity. His voice was both sensual and threatening, and the echo that it was buried in gave the impression that he was delivering his message from the farthest corner of some melancholy, deserted town.

Hearing this performance for the first time, late at night on Radio Luxembourg, was almost like a call to arms for John Lennon. Luxembourg, the British teenage alternative to the BBC, continually broadcast the new pop songs as opposed to the lighter music that parents preferred.

Listening to the sounds of Bill Haley, the Platters, and the Drifters had provided John with a pleasant-enough diversion, but now here was this mysterious stranger from across the water, talking to John about the loneliness that they both shared. It was a subject that he understood, and the language appealed to him.

His reaction was immediate: He had to find out more about this Elvis character. Soon, photos in British magazines and movie newsreels confirmed the unlikely rumors he'd been hearing: The man with the raw, bluesy voice was, in fact, white.

Even more surprising was his actual appearance, which was anything but conventional. His top lip seemed to be fixed in a permanent sneer, his eyes were circled by heavy lids and dark shadows, and his long hair was greased back in a style similar to that of movie star Tony Curtis. Similar, but not identical. Curtis was clean-cut; Elvis wore sideburns, that vaguely threatening trademark of the sullen lower classes. He looked odd, all right. He even had an odd name!

"Nothing really affected me until Elvis," John later reflected, and this simple statement just about says it all. At that moment the effect upon him was total, almost as if everything that had happened to him until then didn't matter. Sure, John had been impressed by James Dean in Rebel Without a Cause, and by the spectacle of the classroom violence instigated by the menacing young Vic Morrow in The Blackboard Jungle, but that was only acting. Elvis, on the other hand, was the living reality.

Elvis Presley behind the wheel of a Cadillac convertible in 1956. By the time “The King” met the Beatles in his Hollywood mansion in August of 1965, he was a virtual prisoner of his own fame.

John acted quickly. Out went the old clothes and the conventional image, to be replaced by an Elvis hairstyle, Elvis sideburns, extra-tight jeans -- called "drainpipes" -- and crepe-soled shoes. He has turned himself into a full-fledged Teddy boy so called in Britain because of the long, Edwardian-style drape coats that the rock 'n' rollers wore. As such, he now had the perfect excuse for looking mean and moody; that's the way Elvis looked, and Elvis was King!

If John had been difficult to handle before, he now became almost impossible, at home as well as at school. His guardian, Aunt Mimi Smith, noticed a change in his behavior right away, especially in terms of his untidiness.

Ray Coleman's John Winston Lennon quotes Mimi as recalling, "He became a mess, almost overnight, and all because of Elvis Presley, I say. He had a poster of him in his bedroom. There was a pajama top in the bathroom, the trousers in the bedroom, socks somewhere else, shirts flung on the floor. … What he wouldn't come to terms with was that I had a house to run. Oh, he was a mess and a problem in those years. Elvis Presley!"

As things turned out, the next few years were ones of constant battles between aunt and nephew. "There's going to be a change in this house," she would shout at him. "We're going to have law and order!"

Not that Mimi's warnings had much effect. John was now heavily into rock 'n' roll, and little else mattered. "It was the only thing to get through to me after all the things that were happening when I was 15," he said many years later to Rolling Stone interviewer Jann Wenner. "Rock and roll was real, everything else was unreal. And the thing about rock and roll, good rock and roll -- whatever good means -- is that it's real, and realism gets through to you despite yourself. You recognize something in it which is true …"