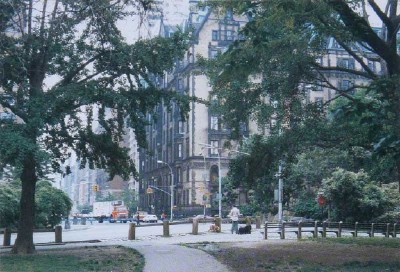 ©
The Dakota building in New York, where John Lennon lived until his death, as glimpsed through the trees of the Strawberry Fields section of Central Park.

For all his efforts at fatherhood and housekeeping after the birth of his son Sean, John Lennon also found plenty of time to indulge himself. On the one hand, this meant doing positive things such as traveling to places as far afield as Hong Kong or South Africa. On the other, it would simply be a case of enjoying one of his oldest hobbies: lazing around and drifting.

A confirmed TV addict, he would spend days lying on top of his large bed, remote control in hand, flicking from channel to channel, watching anything from news bulletins and game shows to old films or science-nature programs. He had also been an avid reader since childhood, and so he could now bury himself in as many books as he liked without having to worry about recording deadlines or sales promotion.

Later on John would say that throughout his four-year retirement he hung up his guitar and hardly gave a thought to music, but this was not strictly true. Certainly to distance himself from the rock business, he most likely didn't listen to mainstream radio stations broadcasting the current chart hits or buy any of the latest records.

But from evidence that has surfaced during the past few years, he definitely turned his hand to songwriting on numerous occasions, and even recorded demos of some of these compositions.

Furthermore, he also rediscovered other former favorite pastimes, and spent many hours making cartoon drawings, writing poems and, in a piece called "The Ballad of John and Yoko," documenting the different stages in his relationship with his wife. After his death, these would be collected and published in a volume called Skywriting By Word of Mouth.

In the book's afterword, Yoko recalled: "John wrote very quickly. Words flowed from his pen like sparkling spring water; he never had to stop to think. ..."

At the same time, his deep involvement in raising a child also renewed his interest in his own early years, and on a few occasions he wrote to Aunt Mimi Smith asking her to send him some of his old paintings, drawings, poetry and school reports.

Since the mid-1960s Mimi had been living in the waterfront bungalow that John had bought her in Poole, on the southern coast of England. There, packed away in cupboards and drawers, she kept many mementos of John's childhood, including his old school tie, which she happily sent to him when he requested it. This must have seemed ironic, considering how much John had hated wearing it in the first place!

In the New York Times of Sunday, May 27, 1979, a full-page advertisement appeared under the heading, "A Love Letter From John and Yoko. To People Who Ask Us What, When and Why." In it the couple explained what they had been doing during the past few years, and described their current situation:

"The house is getting very comfortable now. Sean is beautiful. The plants are growing. The cats are purring. The town is shining, sun, rain or snow."

The Lennons had found the contentment that had previously eluded them by simply living quietly together as a family, away from the prying eyes of the world outside. They appreciated the fact that people were still interested in what they were doing, and thanked those who respected the privacy that they felt they needed at this point.

"If you think of us next time, remember, our silence is a silence of love and not of indifference," they wrote, before signing off and adding a PS.: "We noticed that three angels were looking over our shoulders when we wrote this!''

And who might this trio of winged wonders happen to be? Paul McCartney, George Harrison, and Ringo Starr? If anything, this last line was just a typically Lennonish wind-up, but of course for many it just confirmed their suspicions of John's eccentricity.

As if all this weren't evidence enough, a photo that appeared in newspapers at about that time showed that John had pulled his hair back in a pony tail and had grown a bushy beard and moustache. This "new" look -- actually quite similar to John's appearance of ten years earlier -- aroused comment at the same time that some fans were abuzz over a rumor that John had gone totally bald! One way or another, then, a certain proportion of Lennon-watchers was determined to believe that John was an oddball.

Yet the truth was quite the reverse. Having campaigned for peace in the world for so many years, John was, at last, at peace with himself. He adored his wife and child, was extremely happy with his way of life, and no longer felt the need to prove himself to anyone.

The only conflict that he was suffering was staying out of public life altogether; in many ways he didn't miss the spotlight, but he sometimes felt awkward about going so far out of his way to avoid it.