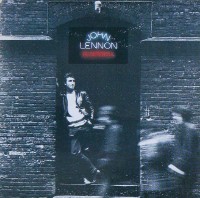 An early John Lennon photo served as the cover of Lennon's Rock 'n' Roll album -- his last before a temporary retirement.

In a 1980 interview with the BBC's Andy Peebles, John Lennon commented, "At the end of Rock 'n' Roll, on a track called "Just Because" ... you hear me saying, 'And so we say farewell from Record Plant' ... and something flashed through me mind as I said it; am I really saying farewell to the business?

"It wasn't conscious and it was a long, long time before I did take time out. And I looked at the cover which I'd chosen, which was a picture of me in Hamburg the first time [the Beatles] got there. ... Here I am with this old picture of me in Hamburg in '61, and I'm saying farewell from Record Plant, and I'm ending as I started, singing this straight rock 'n' roll stuff."

What John was referring to was the spoken bridge near the end of "Just Because," in which he says: "This is Dr. Winston O'Boogie, saying goodnight from Record Plant East, New York. We hope you had a swell time, everybody here says 'Hi!' ... Goodbye."

This passage had been overdubbed in New York, even though the song itself was one of the few recordings done in Los Angeles with Phil Spector that finally made it onto the long overdue Rock 'n' Roll album.

After Spector had eventually returned the tapes to John and John had listened to them, he decided that if the record was to be salvaged then most of the out-of-tune material from 1973 would have to be re-recorded.

Assembling a band in New York in October 1974, he rehearsed them over the course of a weekend, and then entered the studio to lay down 11 tracks within the space of just five days. He and the band knew the songs, so why spend more time than was absolutely necessary?

This was the way that John liked to work. Inspiration was usually the name of his game, and no Lennon-related project had ever taken so long to find its way into the record stores.

To him, the LP's February 1975 release was, at the very least, a tremendous relief, almost as if some great weight had been lifted from his shoulders. To the critics and many members of the public, on the other hand, the record was little short of a rock 'n' roll masterpiece.

Although John was performing songs that had been around since he was 15, his arrangements of many of them were energetic and unique. Rather than simply retrace the steps taken by his teenage idols Chuck Berry, Buddy Holly, Little Richard, Gene Vincent, Larry Williams, and Sam Cooke, he had given the numbers a heavier, almost timeless feel. Songs that would have seemed dated in the hands of a lesser artist suddenly sounded fresh again, without ever straying from a full-blooded rock 'n' roll sound.

John's voice was as sharp as ever, and so were his instincts. It took natural intuition as well as great vision to transform the Ben E. King classic, "Stand By Me," into the rough-edged version that appears on this album, while the renditions of Chuck Berry's "Sweet Little Sixteen" and 'You Can't Catch Me" are markedly different from the originals, but every bit as wonderful in their own way.

Yet perhaps the greatest performance of all was on one of the Spector-produced tracks that was judged unfit for inclusion on the record: a new version of the Ronettes' smash hit, "Be My Baby." Ironically, Spector had produced the original version in 1963. Now, he and John transformed what had been a celebratory girl-group love anthem into a hot 'n' heavy, out-and-out seduction number.

Starting slowly, in a high-pitched, breathless voice, John sounds either high or laid-back beyond belief (or both), before building gradually to the song's climax, by which time he is literally screaming out the lyrics in a manner that can leave his "baby" in no doubt as to how he feels about her.

In several television, radio, and magazine interviews which he gave to promote the Rock 'n' Roll album, John talked about the new material he was putting together for his next record, and even went so far as to mention a TV show that would be produced in connection with it. By this time, however, Yoko had become pregnant, and it soon became clear that John was putting his work on hold in anticipation of the great event.