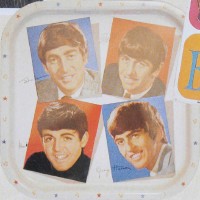 In his separation from Yoko Ono, John Lennon reunited with one of his old Beatles buddies, Ringo Starr.

Drowning his sorrows at the bar while separated from wife Yoko Ono in 1973, John chose as his drinking buddies some of the recording industry's most seasoned tipplers, including Ringo Starr, Keith Moon, and Harry Nilsson.

Living together at a Santa Monica beach house, they caused all sorts of mayhem, and John, always at his most offensive when under the influence of alcohol, got himself both into trouble and into the newspapers.

One of the most notorious incidents took place at L.A.'s Troubadour Club in March of 1974, when John and Harry heckled the Smothers Brothers during their stage act and, after allegedly assaulting the brothers' manager and a waitress, were thrown out onto the street.

For John, this sort of behavior was all too reminiscent of his Art College days, the only difference being that he was now in his mid-thirties and well aware of how damaging the alcohol was to him -- physically, mentally and publicly.

He later reflected to inerviewer David Sheff, "If I died -- the way [poet] Dylan Thomas died -- they'd be saying, 'What a wonderful, colorful way to go.' Because I'm alive, it's not so wonderful. It was the worst time of my life."

Recording sessions aimed at putting together a collection of rock 'n' roll oldies with legendary -- and legendarily eccentric -- producer Phil Spector also fell apart under the spell of brandy and brawling.

Spector, himself not exactly noted for his restraint, subsequently complicated matters by mysteriously disappearing with the master tapes after being involved in a car crash.

John's original intention had been to put together an album of some of his favorite songs, without having to worry about writing the material or even producing and arranging it.

Now he was beginning to regret this decision, even though much of what Spector had in his possession was not of great commercial value anyway.

"There were 28 guys playing a night, and 15 of them were out of their minds, including me," John told Bob Harris in an interview for BBC Television's The Old Grey Whistle Test in 1975. "There were about eight tracks, half of them you couldn't use for one reason or another. ... You've got 10 people playing out of tune."

While remaining in L.A. in a vain attempt to sort this situation out, John somehow managed to produce Nilsson's Pussy Cats album, even though the work was once again often undermined by booze. As if that weren't obstacle enough, Nilsson was suffering from a ruptured vocal cord!

"I was just hanging out with guys, and all we were doing was getting drunk and waking up," John told Bob Harris. "It was sick. ... That's when I straightened out, in the middle of that [Pussy Cats] album. That's when I realized, 'There's something wrong here. Y'know, this is crazy man!' So then I suddenly was the straight one in the middle of all these mad, mad people. I suddenly was not one of them, and I pulled myself back and finished off the album as best I could."

Making his way back to New York in June of 1974, John began to take some positive steps with regard to his own career.

With the Phil Spector rock 'n' roll tracks still on ice, he wrote an astounding ten songs in the space of just one week and quickly recorded the Walls and Bridges album. Full of beautiful melodies and poetic, meaningful lyrics, this record signaled a definite return to form, and also served notice to May Pang that she didn't really fill the void left by Yoko.

May, who was the LP's production coordinator, was quick to pick up on the one track written with her in mind -- "Surprise, Surprise (Sweet Bird of Paradox)" -- but it was also difficult to miss the point of the other songs, most of which described John's feelings of loneliness and despair, and his continuing affection for his wife.

In "Bless you" he wrote:

And in "Scared" he expressed his loneliness, his fear that he was wasting his life, and his awareness of the bad influences surrounding him:

The album's finest moment, however, came with "Nobody Loves You (When You're Down and Out),'' the only song that John composed on his own during the unhappy months in Los Angeles; it perfectly captured his feelings of depression:

"I've been across the water now so many times I've seen the one-eyed witch doctor leading the blind And still you ask me do I love you what you say, what you say Every time I put my finger on it it slips away"