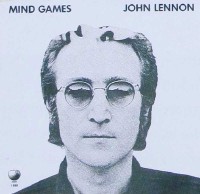 John Lennon's Mind Games album had some memorable songs, including the title track, "You Are Here."

While John Lennon was speaking out musically in 1972, the U.S. government was keeping strict tabs on "Mr. Lennon." Earlier in the year, he and wife Yoko Ono had been served with deportation orders on the grounds of John's 1968 cannabis conviction, but what he didn't realize at the time was that the moves to oust him were being directed by the top man in the land.

President Nixon had been informed by his advisors that John had fallen in with bad company, people who would stop at nothing to undermine the Republican Party's chances of winning the forthcoming election. With the public backing of an ex-Beatle, the members of this anti-Nixon faction were evolving from being a nuisance into a major threat.

Memos and reports flew back and forth between senators, the FBI, and the U.S. immigration office, all revolving around the paranoid order to "get Lennon out."

At first, John thought he was only imagining that his phone was being tapped and that he was being followed by cars, but pretty soon he began to get the message.

Every time he was ordered out of the country his lawyer would delay the process and file an appeal. Public figures came forward to support him, including New York City's Mayor Lindsay, but all of this was ignored by the authorities, who had been "reliably informed" that John and his radical colleagues were planning to disrupt the Republican National Convention in San Diego that August.

In actual fact, the authorities had been misinformed. When Jerry Rubin, Abbie Hoffman and other radicals revealed that they were planning to cause a riot, John and Yoko lost interest in the group's activities and backed away. Raising fists in the air was one thing, but using them to hurt innocent people was unacceptable.

"We said, 'We ain't buying this,' " John told Playboy interviewer David Sheff in 1980. "'We're not going to draw children into a situation to create violence -- so you can overthrow what? And replace it with what?' ... It was all based on this illusion, that you can create violence and overthrow what is, and get communism or get some right-wing lunatic or a left-wing lunatic. They're all lunatics."

In a 1980 interview with Newsweek's Barbara Graustark, he would admit that his political activism of the early '70s had been misguided, basically stemming from a feeling of guilt over earning so much money. "When you stop and think, what the hell was I doing fighting the American government just because Jerry Rubin couldn't get what he always wanted -- a nice, cushy job."

Their radical days virtually at an end, John and Yoko now reverted to more constructive ways of trying to right the world's wrongs. On August 30, they headlined two One to One concerts at New York's Madison Square Garden, raising $1.5 million for the mentally handicapped and personally donating $60,000 in the process. Although John would appear on stage a couple of more times during the next few years, these were to be his last full-scale shows.

December 1972 saw the release of the Imagine film, based on the 1971 album of the same name, and featuring the couple at work and at play, both in Ascot and New York. By 1973, however, their relationship was not quite so harmonious.

The pressures of John's immigration problems, Yoko's unsuccessful search for her kidnapped daughter, their disappointment with their political activities, the negative response to their recent recordings -- all of these caused cracks in the marriage.

Any such problems were not apparent on John's Mind Games album, however, which was released in November. Musically, it seemed to be a purposeful return to the familiar themes of peace, freedom, and John's love for Yoko, all of which had characterized the music he had produced a couple years before.

It also meant that John was at least now facing in the right direction again, even though, for the first time in his career, he had to take a backward step in order to achieve this.

By no means a classic piece of work, Mind Games did have some great moments, such as the powerful title track, the Latinesque "You Are Here," and the beautiful love song, "Out the Blue," in which John sings:

"All my life has been a long slow knife I was born just to get to you Anyway, I survived long enough to make you my wife"

Heartfelt sentiments indeed, yet by the time these words were being broadcast on the radio and played on people's stereo systems, John and Yoko were no longer living together. He had moved to Los Angeles with his wife's former secretary, an attractive Asian girl named May Pang.

Later, conflicting accounts would attempt to explain how this change in lifestyle came about. May's opinion was that John had left of his own free will; John, on the other hand, asserted to Andy Peebles during the BBC radio interview that Yoko, sick of his irritable moods and fading concern for her, "said 'Get the hell out' and kicked me out."

Either way, it was decided that the trustworthy Miss Pang would be a good companion for John during the trial separation; his initial reaction was relief at his new-found freedom. For the first time since he was at Art College, he was virtually unattached.

As John recounted to Playboy's David Sheff, "Well, first I thought, 'Whoopee! Bachelor life! Whoopee, whoopee!' And then I woke up one day and thought, 'What is this? I want to go home.' But she [Yoko] wouldn't let me come home. ... We were talking all the time on the phone and I kept saying, 'I don't like this. I'm out of control. I'm drinking. I'm getting into trouble and I'd like to come home, please.' And she's saying, 'You're not ready to come home.' 'What are you saying?' Well, okay, back to the bottle."