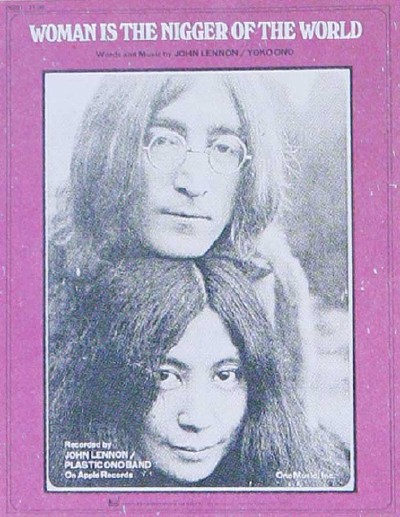 "Woman is the Nigger of the World," a relatively strong track off of Some Time in New York City, still fell far short of John Lennon's other work.

During early 1971, a noticeable shift of emphasis took place in the political beliefs of John Lennon and Yoko Ono. Until now, they had preached non-violence at all costs, sending acorns to world leaders as a symbol of their peace campaign, and urging students caught up in the notorious Berkeley riots of 1969 not to retaliate when provoked by the authorities.

On the song "Revolution," which was the B-side to the Beatles' 1968 "Hey Jude" single, John had sung:

"You say you want a revolution Well, you know, we all want to change the world"

If others wanted to rebel against law and order to bring about a complete change within society, then that was up to them, but he wasn't yet sure whether or not he wanted to become involved in these activities. By March of '71, however, when the single, "Power To The People," was released, the Lennons were posing for publicity photos decked out in Japanese riot gear, and John was singing:

Clearly, they were now ready to take up the cause (whatever that might happen to be), but they were walking on slippery ground. They should have learned their lesson from an embarrassing episode that had taken place the previous year, when they had their hair cropped and donated the trimmings to the notorious British Black Power leader, Michael X (real name: Michael Abdul Malik). He in turn auctioned the trimmings and used the proceeds to support a black-culture center in London.

John and Yoko were happy to pose for photos with him, but they must have been dismayed a few months later when X's "Black House" burned down and he was arrested for robbery. In 1973, X would be convicted in Trinidad of committing two murders, and, despite John paying for his appeals, he would be hanged in 1975.

John had freed himself from being a Beatle, yet he seemed unable to keep away from those who were only too happy to latch onto him and profit from his status as an ex-Beatle. This was especially true once he and Yoko had moved to New York. Basing themselves after a few months in a two-room apartment at 155 Bank Street in the West Village, they were soon surrounded by all manner of political radicals, including Abbie Hoffman, "Yippie" leader Jerry Rubin, rock "activist" David Peel, and Black Panther chairman Bobby Seale.

The bottom line of these people's shared interest was to help bring about the overthrow of President Nixon's government, and discussions would go on late into the night at the Bank Street address in which the participants devised ways in which to achieve their aim. Out of this came the Lennons' involvement in protest rallies, several concerts in benefit of some worthy and not-so-worthy causes, and the most disappointing studio album of John's career.

Some Time In New York City, released in the United States in June of 1972, boasted a cover that mimicked the look of a typical New York Times front page, complete with song lyrics printed to look like feature stories, and accompanying photos that included a mocked-up shot of Nixon and China's Chairman Mao dancing naked together. Inside there were two records, and while the second one comprised live material from a couple of John and Yoko's concert appearances, the body of new work was contained on the first disc.

These new songs, some written by both John and Yoko, others separate efforts, stated the cases of different social and political issues that had been brought to their attention:

Northern Ireland, Women's Liberation, the imprisonment of left-wing radicals John Sinclair and Angela Davis, and the Attica State Prison shootings. The idea of presenting the album almost like a collection of journalists' reports wasn't a bad one, but the problem was that the readers -- or, in this case, the listeners -- found it difficult to believe that John and Yoko had a passionate concern for what seemed to be every cause that came their way.

Reinforcing the fans' dubious perception of the LP were John's lyrics, which were unusually awkward and often pieced together expressly to make a political point. This was the case even with a strong track like "Woman is the Nigger of the World":

Not John at his best; he seemed merely to be reflecting other people's opinions, rather than describing feelings that came from his own heart. Dealing in areas that were unfamiliar to him, he was, quite simply, out of his range.

In Britain, where the record was released in September of the same year, the public didn't take kindly to being labeled a bunch of brutal murderers in songs such as "The Luck Of The Irish" and "Sunday Bloody Sunday," especially since those sentiments came from someone who shared their nationality but had moved away from their national problems.

"Why the hell are the English there anyway As they kill with God on their side! Blame it all on the kids and the IRA As the bastards commit genocide"