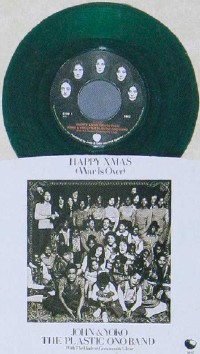 Despite some cheap shots at Paul McCartney in the early 1970s, John Lennon's work in this period is mostly known for sentimental songs like "Happy Xmas."

Not many recording artists could have gotten away with work of such a personal nature as John Lennon's Plastic Ono Band album, but John's talent and basic integrity allowed him to pull it off. In the process he single-handedly advanced the art of popular music as a means of communication. This was yet another high point in his career, and the following year, 1971, he continued the trend with the Imagine album.

Again, almost every track was quite outstanding, but this time around the music was, for the most part, gentler and more melodic, as John sang with greater calm about his insecurities ("Crippled Inside," "Jealous Guy," "It's So Hard," "I Don't Want To Be A Soldier," and "How?"), his beliefs ("Give Me Some Truth" and the title-track), and his personal happiness ("Oh My Love" and "Oh Yoko!").

In sharp contrast to the introspection, however, was "How Do You Sleep?," a song full of sarcastic insults aimed directly at Paul McCartney, in response to what John had perceived as some less-than-complimentary remarks in the recent work of his ex-friend and partner. But whereas few people would have been aware of Paul's typically subtle jibes, there could be little mistaking what John was trying to say:

"You live with straights who tell you, you was king, Jump when your momma tell you anything, The only thing you done was yesterday, And since you've gone you're just another day."

The song's mention of "momma" was a mischievous reference to Paul's wife, Linda, and the allusion to "Yesterday" suggests John's opinion that the popular Beatles hit was Paul's only composition of real distinction. "Another Day" was the title of one of the pair's recent singles. Still, just in case anyone missed the point, while the cover shot of Paul's Ram album featured him holding onto one of his woolly friends on his Scottish farm, John's Imagine LP came with a free photo of Mr. Lennon grappling with a pig!

This, of course, was simply a case of John showing his snippy side and illustrating, as he would have been the first to admit, that he had faults and weaknesses like anyone else.

"There was something very spiritual and magical about John," recalls record producer Eddy Offord, who engineered three of the tracks on the Imagine album. "He was such a simple kind of guy -- very down-to-earth -- but he had a feeling that was very special, and I will never ever forget that experience. ... When I look back on my career, it was, actually, one of the highlights."

Honesty being one of his main virtues, there could be no doubting the sincerity of the sentiments that John expressed in two other songs from this period, both of which are now rightly regarded as classics. On the single "Happy Xmas (War is Over)," he once again preached peace and harmony among all people:

"And so happy Xmas, For black and for white, For the yellow and red ones, Let's stop all the fight."

The Imagine title track, on the other hand, pictured a world without all of the things that have caused heartache, pain and suffering, since the start of time; no fighting over beliefs, no greed, no starvation.

"Imagine there's no countries. It isn't hard to do. Nothing to kill or die for, and no religion, too. Imagine all the people sharing all the world. ..."

Lyrics such as these best sum up John's heartfelt hopes and desires, yet he and wife Yoko Ono were still suffering the intolerance of a British public which had never taken to her. The four-month stay in Los Angeles the previous year had provided a different experience, with people more willing to accept the couple on their own terms, while also allowing them the freedom to walk the streets along with everyone else. America appeared fresh and exciting; the place of John's dreams, the country that had given birth to rock 'n' roll.

Back in England, the Lennons had moved to the Ascot countryside in order to escape from prying eyes, but although their Tittenhurst Park mansion was certainly magnificent -- set in 70 acres of beautiful heathland and woods, complete with an artificial lake -- John and Yoko felt isolated there.

On September 3, 1971, they left London's Heathrow Airport for New York. Initially, this was to be a short visit aimed at locating Yoko's daughter, Kyoko; but John, although he didn't realize it at the time, would never see his native country again.