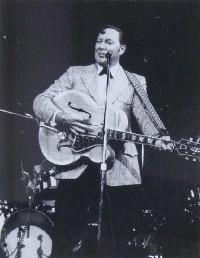 Bill Haley and His Comets found enormous success beginning in 1954, but young John Lennon was not enticed by the singer’s friendly, unrebellious image.

During John Lennon's earliest years, music never really played a major part in his life. At the age of eight he sang in the choir of St. Peter's Church near his home, but his career there came to a swift end once it was discovered that he and his friends had been eating the grapes used to decorate the church for the Harvest Festival.

Then, when John was ten, his Uncle George Smith bought him a cheap harmonica that he carried in his blazer pocket. Once, on his way to visit an aunt in Scotland, he played it throughout the bus journey.

"The driver liked it and told me to meet him at a place in Edinburgh the next morning, and he'd give me a good mouth organ," John recalled in an interview with Record Mirror in 1971. "So I went, and he gave me a fantastic one; it really got me going. I also had a little accordion which I used to play -- only the right hand -- and I played the same things on this that I played on the mouth organ; things like 'Swedish Rhapsody,' 'Moulin Rouge,' and 'Greensleeves.' "

At this point, he was showing just a natural child's curiosity about music; it could hardly be said that music was in his blood. Later on, during John's early teens, the first rumblings of rock 'n' roll were heard when Bill Haley and His Comets released popular records such as "Crazy Man Crazy" and "Rock Around The Clock." But Haley, a chubby-faced man with a spit curl, looked more like a parent than a teen idol, and he made very little impression on the young Lennon.

"The Bill Haley era passed me by, in a way," he said in the Record Mirror interview. "When his records came on the wireless, my mother would start dancing around, she thought they were so good. I used to hear them, but they didn't do anything for me."

Maybe, but the fact that he would associate memories of his mother with this era -- despite being raised by his aunt and uncle -- is a sign of just how close the two were becoming. John felt more and more drawn to this bubbly red-headed woman, not only because of the way she encouraged his rebelliousness, but also because of her quirky, often eccentric sense of humor, something that he could readily identify with.

"[Julia] was a fabulous, fabulous woman," says Pete Shotton, John's childhood friend. "She always made us welcome when we were skiving off school, and apart from the fact that she was such good fun to have around, she was more like a friend than a mate's mother. She didn't act like a parent, she didn't talk like a parent. She made a game of everything -- she would even dust the furniture moving around as if she were a ballet dancer -- and the things that she did showed her eccentricity."

Among the more notable examples was the time she met the two boys in public, wearing a pair of knickers (bloomers) on her head in place of a scarf. Pete Shotton remembers, "They were the old-fashioned kind of knickers, you know, so the legs were hanging down over her back. People were staring, but she was just so cool about it, it was hysterical!

"Then there was another occasion, when we were walking along with her and she was wearing a pair of specs with no glass in the frames. No one really noticed, until she'd go up to someone she knew, start talking to them and casually rub her eye by poking her finger straight through the frame. We'd be watching all this, literally crying with laughter!"

Yet, while matters seemed to be taking a definite turn for the better in his private life, back at school John was still going nowhere fast. Showing no concern for either his studies or his future, his main interest lay in disrupting the class. There was, however, a productive side to his antics.

The homework session at the end of each day wasn't supervised by anyone, and John therefore saw this as a great chance to put his budding artistic and poetic skills to the test. Grabbing hold of old exercise books, he would fill them with cartoons, nonsense verse, and outrageous caricatures of the teachers. The cover of each book would bear the title The Daily Howl, and these would then be passed around, under the desks, to the delight of his schoolmates (and, quite often, the teachers, as well).

The poems, which usually contained more rhyme than reason, displayed a love for wordplay that John would later put to good use in classic songs such as "I Am The Walrus." By switching letters, replacing them, or omitting them completely, John could not only make words sound different, but sometimes imbue them with a double meaning.

So it was that the then-popular Davy Crockett was lampooned in The Story of Davy Crutch-Head, while other little gems included Tales of Hermit Fred and The Land of the Lunapots, as well as a weather report stating that "Tomorrow will be Muggy ... followed by Tuggy, Wuggy and Thuggy."

Until now, these compositions were one of the very few outlets for John to express his individuality, to mark himself out as different from the rest. Little did he realize that just around the corner an event was about to take place that would totally reshape the face of Western popular culture, and, along with it, his own life as well as those of millions of others. It would hit with the impact of an earthquake, the tremors of which are being felt to this day.