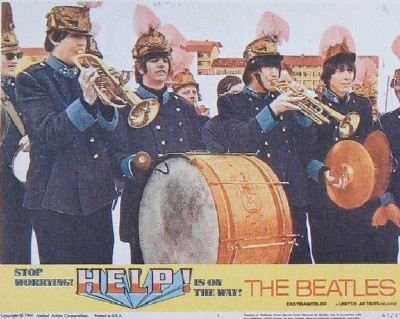 John Lennon's film projects with Yoko Ono were a far cry from straightforward Beatles' films such as Help!

Many people viewed John Lennon and Yoko Ono as clowns. At the same time that images of the bedded and "bagged" couple (they gave press conferences from within a large white bag) appeared in newspapers and cartoons around the globe, their names were dropped into the middle of a gag by every two-bit comedian who wanted an easy laugh.

But for all this, what John was saying was absolutely correct: Intellectual discussions on the subject of promoting peace rarely made the front pages of national papers and magazines, whereas the antics of himself and Yoko undeniably did. One way or the other, they were getting their message across and making people smile at the same time. Their credibility may have been suffering, but it was difficult to criticize their sentiments.

The main reason for John and Yoko's 1969 visit to Austria, in fact, was to promote Rape, a new avant-garde film that they had produced. The movie sets out to demonstrate how the media often make unfair intrusions into people's lives; it does this by having a cameraman and sound assistant pick out an innocent girl walking in Central London, and then follow her wherever she goes. Initially amused, she eventually becomes angry, frightened, and confused, especially when the two movie-men follow her home.

Rape was, indeed, one of the more easy to understand of John and Yoko's cinematic efforts. Having involved Yoko in his music and taken part in her art exhibitions, John was also interested in participating in her particular brand of film-making.

Yoko's specialty was to capture a piece of action -- no matter how brief -- with a high-speed camera and then replay the footage in super-slow motion. So it was that between 1968 and 1972 their movie collaborations included Smile, a 52-minute film of John smiling, raising his eyebrows, and sticking his tongue out; Self-Portrait, a 15-minute close-up of John's penis; and Erection, a study not of John, but of the 18-month construction of the London International Hotel, accelerated in this case to 18 minutes. In Up Your Legs Forever, 331 people were filmed from foot to thigh.

Some of the work, as simplistic as it may have appeared, did have a loose structure: Their sound album Two Virgins, for instance, consisted of 19 minutes' worth of John and Yoko's faces superimposing and eventually merging.

Many of the pair's other film projects, however, were in the Andy Warhol let's-shoot-and-see-what-happens tradition, whereby a camera would be turned on and left to capture whatever might take place. Therefore, 18 continuous minutes of a flight in a helium balloon were the sum total of Apotheosis, while the unforgettable Fly featured a little winged wonder crawling his way around the nooks and crannies of a naked woman's body.

All of this was clearly a million miles away from the likes of A Hard Day's Night and Help!; for John these films were not merely illustrative of his new interests, but evidence that he had dedicated himself to starting a brand new life.

In later years he would refer to the 1940-1968 period before he teamed up with Yoko as "my first incarnation." In line with this way of thinking, on April 22, 1969 he changed his middle name from Winston to Ono in a formal ceremony on the roof of the Beatles' Apple building. From now on, therefore, he would call himself John Ono Lennon.