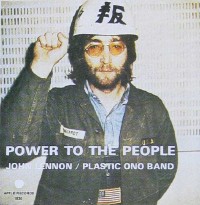 John Lennon's 1971 single Power to the People grew out of the activism stage of his career.

By anyone's standards, even John Lennon's, 1969 was a truly remarkable year. During the period when man first landed on the moon, when thousands of young men were dying in Vietnam, and nearly half a million kids gathered for a three-day rock concert near Woodstock in upstate New York, John's own life was packed with action, incident, drama and controversy.

Never one to do things by halves, he not only threw himself with boundless energy and enthusiasm into everything that he and Yoko Ono did, but he also ensured that all of this took place within the full glare of the media spotlight. This way, they both reasoned, they could gain maximum exposure for two of the things that mattered to them most: Their political views and their art, which were increasingly becoming one and the same thing.

During the early years of the Beatles' international fame, John had been under strict instruction from Brian Epstein to keep his opinions on subjects such as the Vietnam War to himself. As time went on, however, and as pro-peace movements around the world began to grow, he made his feelings clear to anyone who asked. Now he was going to give his opinions free rein.

The finalization of Yoko Ono's divorce from her second husband, Tony Cox, in February 1969, along with the custody that she was granted of their daughter, Kyoko, opened the way for her and John to marry. This they did in Gibraltar on March 20. Five days later the newlyweds moved into Room 902 of the Hilton Hotel in Amsterdam, Holland, and embarked on a seven-day "bed-in" for peace.

"We knew that whatever we did was going to be in the papers," John told Tom Snyder on NBC television's Tomorrow show in April 1975. "So we decided to utilize the space we would occupy anyway by getting married, with a commercial for peace and also a theatrical event. And the theatrical event we came up with, which utilized the least energy with the maximum effect, was to work from bed, and what we virtually had was a seven-day press conference in bed.

"The press, on the first day, they fought at the door to get in, thinking there was something, y'know, sexy going on, and they found two people talking about peace. And reporters always have five minutes with you or ten minutes with you; we let them ask anything for as long as they wanted for seven days, and all the time we just kept plugging peace."

The scene that was captured by the world's cameras was one of John and Yoko sitting in their pajamas on top of a large double bed, surrounded by friends, reporters, flowers, and hand-drawn posters exclaiming "Peace," "Hair Peace" (a typically Lennonish pun), "Remember Love," and "Bagism."

This last-mentioned term referred to the couple's recent tendency to give interviews while inside a large white bag. One of the most celebrated examples of this came immediately after the week-long spell in Amsterdam, when the Lennons flew to Austria in order to hold a press conference at Vienna's Hotel Sacher. With cameras whirring and clicking, and the reporters looking simultaneously confused and amused, John explained that they were witnessing another peace protest. "But why the bag?" asked one of the onlookers.

"Because we believe in total communication," came the reply from within. "That means if we have something to say, or anybody has something to say, they can communicate and not confuse you with what color your skin is or how long your hair's grown ...

"All we're saying is give peace a chance. But if the least we can do is give somebody a laugh, we're willing to be the world's clowns, because we think it's a bit serious at the moment and a bit intellectual."