The End of The Beatles, a New Era for John Lennon 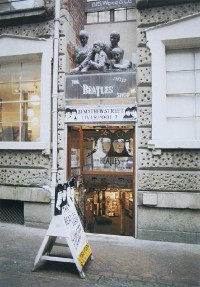 ©
The Beatles broke up in 1970, but the demand for the group may never die -- as evidenced by the Beatles Shop in Liverpool, just a few yards from the former site of the Cavern Club.

While the Beatles were recording the White Album, the group grew tired of the setup: Ringo Starr with the unhappy atmosphere; George Harrison with the way that his talents were being stifled by John Lennon and Paul McCartney; John with Paul's bossiness and self-interest; and Paul with John's eccentric public behavior and his obsession with Yoko Ono.

The two ex-songwriting partners were also becoming irritated by the widening gap in their musical tastes: John felt that a snap-happy tune like "Ob-La-Di, Ob-La-Da" should never have found its way onto a Beatles album. Paul felt that "Revolution 9" had been similarly misguided.

This last-mentioned track wasn't, in fact, a song at all, but instead just a collage of different sound effects combined with assorted snatches of John speaking. Put together by him and Yoko, with George Harrison and George Martin, it was disjointed and certainly the strangest contribution ever to appear on a Beatles record, but at this time it was very much in line with the new "musical" direction that the couple was exploring.

The pair's collaboration culminated in a short series of avant-garde albums, the first and most famous of these being Unfinished Music No. 1: Two Virgins, which they had recorded on the night that John invited Yoko to his house while wife Cynthia was in Greece.

Released on November 29, 1968, the disc mainly consisted of the two of them making assorted squawking, screeching, and twittering noises, to the occasional accompaniment of a tinkling piano and slowed-down tape effects. To John it was a progression on the kind of sound tricks that he had experimented with on Beatles tracks such as "Rain," "I'm Only Sleeping," and "Tomorrow Never Knows."

Although undeniably novel, Two Virgins would have been quickly forgotten had it not been for the infamous cover photographs: On the front, John and Yoko stood together totally naked, facing a remote-controlled camera; on the back, predictably, was a shot of them taken from behind. This sort of unblushing sleeve art would be outrageous even today, but in 1968 it had old ladies reaching for the smelling salts.

John later explained that he and Yoko could have chosen more complimentary photos for the album cover, but the unglamorous ones that were used were intended as a message.

In an RKO Radio interview on December 8, 1980, John recalled, "We wanted to say, 'We met, we're in love, we want to share it.' And it was kind of a statement, as well, of an awakening for me, too. 'This Beatle thing you've all heard about, this is how I am really.' You know, 'This is me naked, with the woman I love. You want to share it?'"

The problem was that not many people did want to share it. John, however, couldn't have been too surprised by this response. From his early childhood he had always enjoyed shocking people, and the album sleeve was just another Lennon send-up. The only difference this time around was that instead of his victim being a specific person, he managed to shock the general public.

In the RKO interview, John cast himself in the role of the outraged public, asking, " 'What are they doing? This Japanese witch has made him crazy and he's gone bananas!' But all she did was take the bananas part of me out of the closet more, that had been inhibited by the other part. It was a complete relief to meet somebody else who was as far out as I was."

In many ways, John and Yoko were having a ball, but it wasn't all fun and games. On October 18, 1968, while staying at Ringo's apartment in Montagu Square, Central London, they were arrested for possession of cannabis and obstruction of the police in their execution of the search warrant.

John's divorce from Cynthia became final on November 8, and on the 21st he was by Yoko's side in the hospital when she suffered a miscarriage of the baby that she was expecting. A week later, anxious to minimize the possibility of Yoko being deported (she was not a British citizen), John pleaded guilty to the cannabis charge and was fined £150 ($360).

The year 1969 got off to an equally gloomy start. The January film and recording sessions for the doomed Let It Be project -- during which the Beatles compensated for a lack of inspiration with lots of petty squabbles -- brought home the fact that the band that John had started was now little more than a time-consuming burden to him.

To make matters worse, the Beatles' business affairs were in such a mess that they were rapidly going broke, and at John's instigation the legendary entertainment business manager Allen Klein was brought in to try to salvage the situation.

New York-based, Klein specialized in securing back royalties for his clients, and convincing record companies to hand over enormous advance fees. His clients had included the Rolling Stones, Herman's Hermits, the Animals, and the Dave Clark Five. He was tremendously successful, but had also run afoul of the Securities and Exchange Commission in the mid-sixties, after taking control of bankrupt Cameo-Parkway Records and pushing its stock price through the roof by, it was said, instigating untrue takeover rumors.

Regardless, Klein became the Beatles' business manager in the spring of 1969, and soon set about trimming the fat off the Apple, their business venture. Paul McCartney distrusted him, and his later refusal to be handled by Klein only served to widen the rift within the group.

Although the August sessions for the Abbey Road album signaled a welcome return to form, John was by now actively pursuing an increasing number of solo projects. His heart was no longer really in the Beatles, for he could work with Yoko and indulge his new musical ideas without having to justify them.

Paul, always the most enthusiastic member of the group, tried hard throughout much of 1969 to rekindle the interest of his three reluctant colleagues, but all he really seemed to achieve as a result of his persuasive efforts was to annoy them even more.

Matters came to a head during a meeting in the Apple offices, when John kept turning down all of Paul's suggestions as to what the band should do next. The following year, John told Rolling Stone interviewer Jann Wenner, "So it came to a point I had to say something, of course, and Paul said, 'What do you mean?' I said, 'I mean the group is over, I'm leaving.' ... Like anybody when you say divorce, you know, their face goes all sorts of colors. It's like he knew, really, this was the final thing."

The end for the Beatles meant the beginning of a new era for John, and the realization that, for the first time in his life, he didn't have to comply to what people wanted or expected of him. Yoko was all the support he needed but, in a musical sense, from here on in he would have to fall back pretty exclusively on his own talent. A completely new adventure was about to begin.