John Lennon and The White Album 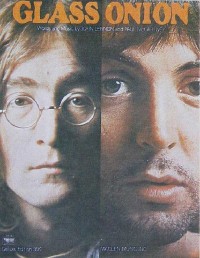 "Glass Onion" is an example of John Lennon's poetic lyrics on the White Album.

The lyrics John Lennon wrote for songs on The White Album were poetic but to the point, and covered a broad range of topics:

Opposition to American involvement in Vietnam, in "The Continuing Story Of Bungalow Bill" ("He's the all-American bullet-headed Saxon mother's son"),

Reluctance to support the student riots of 1968, in "Revolution" ("If you want money for people with minds that hate/All I can tell you is brother you have to wait"),

The problems of insomnia, in "I'm So Tired" ("You know I can't sleep/I can't stop my brain/You know it's three weeks/I'm going insane"),

Feelings of depression, in "Yer Blues" ("Black cloud crossed my mind/Blue mist round my soul/Feel so suicidal/Even hate my rock and roll"),

Sexual pleasure, in "Happiness Is A Warm Gun" ("She's well acquainted with the touch of the velvet hand/Like a lizard on a window pane").

Then there were songs addressed to people who John knew or had known:

The Maharishi, whose name was jokingly disguised as Sexy Sadie, ("Sexy Sadie, what have you done?/ You made a fool of everyone"),

Mia Farrow's sister, "Dear Prudence," who was constantly meditating when the Beatles and their friends were in India ("Dear Prudence, won't you come out to play?/Dear Prudence, greet the brand new day"),

Paul McCartney, who is paid an inaccurate compliment in Glass Onion ("Well here's another clue for you all/The Walrus was Paul"),

This last number, in fact, also contained two other revealing lines: "Ocean child, calls me" was a reference to Yoko, whose name means ocean child in Japanese; and the self-explanatory, "When I cannot sing my heart, I can only speak my mind."

Yet John reserved some of the greatest lyrics he would ever write for a song that was originally intended -- and should have been released -- as a single, but instead ended up being donated to a various-artists charity disc, before turning up on the Let It Be album.

The song was "Across The Universe" and the beauty of the poetry and the power of the imagery and wordplay stand as one of the finest samples of the genius of John Lennon:

John, typically, was never pleased with the recording or the way that he sang it, but he was particularly proud of the lyrics. "They were purely inspirational and were given to me as boom!" he told Playboy in 1980. "I don't own it, you know; it came through like that. I don't know where it came from. ... It's not a matter of craftsmanship; it wrote itself. It drove me out of bed. I didn't want to write it, I was just slightly irritable and I went downstairs and I couldn't get to sleep until I put in on paper, and then I went to sleep.

"It's like being possessed; like a psychic or a medium. The thing has to go down. It won't let you sleep, so you have to get up, make it into something, and then you're allowed to sleep."

For all of its tremendous music, however, The White Album signaled the beginning of the end for the Beatles. Apple Music, the band's own label, was an undisputed success but the other Apple divisions were only eating up the Beatles' money, and not producing any -- were not, in fact, even issuing any products. Apple headquarters was less a place of business than a rendezvous where staffers could eat and drink at their bosses' expense.

The Beatles' accountants threw up their hands. Tensions within the group escalated and the members' squabbles, the personal ones and those caused by the troubled Apple empire, manifested themselves in the reality of the Beatles no longer performing together as a group. Instead, each member was only really interested in recording his own songs, and casting the other three in the subordinate roles of session musicians.