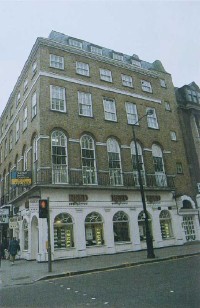 ©
The building at 94 Baker Street, London, housed the Beatles' Apple business ventures in the late 1960s.

Heads turned and eyebrows were raised when John Lennon dared to bring Yoko Ono with him to the Beatles' recording sessions. Beatle wives and girlfriends normally stayed firmly in the background, taking care of the home or the children, and coming out into the open only when there was a suitable occasion, such as a showbiz party. The studio was where the men worked and played; this was the way it had always been and, no doubt, the way it was going to stay.

Yoko, on the other hand, was in no way prepared to settle for the unrewarding role of "the little woman." An extremely forceful character, she had forged her own career in the world of avant-garde art, and if John wanted to be with her then he would have to accept her on equal terms. Never mind his star status; she'd hardly even heard of him before they first met! For a man who, all his life, had been accustomed to women always being there to serve his every whim, Yoko's attitude was a real eye opener.

"Yoko was a very liberated woman," says Pete Shotton, Lennon's childhood friend. "She considered herself, quite rightly, to be as good as anybody else whether they be male or female, and she was damned well not going to be treated like a 'Beatles woman.' That was half the beauty of it all: Someone had stood up to John and said 'No' to him!"

"You have to remember that John, like myself, came from a completely male-dominated environment back in Liverpool," adds Bill Harry, a friend from art school. "The girls were generally very meek, and many of them would do whatever the boyfriends said. This continued when they got married -- the house was the husband's house, the money was the husband's money -- and it was a terrible system which still exists to some extent.

Now, however, the male chauvinist was faced with a tough feminist who demanded as much say and as much attention as he did. What's more, John was so besotted by Yoko that he didn't want to be apart from her for even a few minutes, let alone several days. He had waited long enough to find his soul mate, and now he was going to share every moment with her.

"Even though John was one of the most popular men in the world for quite a long time, surprisingly enough he had no real close friends outside of the Beatles themselves and their very tight-knit circle," asserts Shotton. "John formed very intense relationships with very few people, and that's all that he needed."

There again, the irony of John and Yoko's intense relationship was that while they were both highly individual people, they each seemed intent on submerging their own personality in order to exist as a couple. As John himself often said, "We are one person."

The upshot of all this was that Paul McCartney, George Harrison, and Ringo Starr were suddenly confronted with Yoko sitting in on their recording sessions. Worse still, she not only tried to join in on some of the songs, but -- horror of horrors -- dared to offer her own musical suggestions. Needless to say, this didn't go down at all well, and it soon became abundantly clear to John that if he wanted to work with Yoko, then it wasn't going to be within the structure of the Beatles.

In the meantime, he was writing and recording some of his most potent material to date for the group's next album, a twin-record set titled simply The Beatles, (now popularly referred to as The White Album, for its pristine white sleeve), released in November 1968.

The LP was issued on the Beatles' own Apple label, formed at considerable expense in early 1968 as part of an ambitious business enterprise that included two Apple retail stores, Apple Electronics, Apple Films, Apple Management, and Apple Music, the latter the focus of the group's independent recording and publishing company. With Apple, the Beatles hoped to gain full control of their artistic and business destinies.