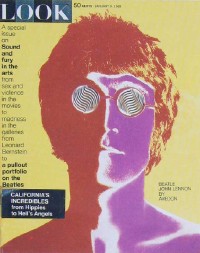 John Lennon's love for Yoko Ono was so powerful, so all-consuming, that it took no account of the pain it might inflict on others; it also took no account of the pain that would be inflicted on them. John saw Yoko fulfilling the roles of friend, wife, lover, teacher, mother; someone with the same views, the same outlook, the same taste for the bizarre -- "Me in drag," as he once put it.

The British press and public, on the other hand, had a distinctly different impression of her, especially while John was still with the Beatles. What was the leader of the Fab Four doing, deserting his loving, faithful wife and taking up with this strange, mystical, Oriental woman who dabbled in all forms of weird but not-so-wonderful art?

John and Yoko's first public "event" together, on June 15, 1968, was the planting of two acorns in the grounds of Coventry Cathedral, one facing east, the other facing west. The planting was intended as symbolic of their meeting and love for one another, as well as the uniting of their two cultures. John regarded the world of conceptual and avant-garde art as a refreshing change from the commercially driven pressures of Beatlemania, and, following Yoko's lead, he was bubbling over with ideas that matched hers.

Three days later, the two of them turned up at London's Old Vic Theatre to attend the opening night of the National Theatre's stage production of part of John's book, In His Own Write. Their presence really set the reporters' tongues wagging in the following morning's national newspapers.

Needless to say, the journalists all made sure that they were at the next grand opening that would be attended by the "odd couple," this being John's first full art exhibition, held at The Robert Fraser Gallery on July 1. Titled You Are Here, it contained a Yoko-inspired mixed bag of odd objects; John kicked off the proceedings by cutting a string and allowing 365 helium-filled white balloons to float up into the London sky. Attached to each was a note stating: "You Are Here. Write to John Lennon c/o Robert Fraser Gallery, 69 Duke Street, London W1."

People responded, all right, but hardly in the way that John had been expecting. While the critics looked at the exhibition and shouted "rubbish!" the balloon cards arrived in the hundreds, telling John to go back to his wife and criticizing a whole catalog of things: Yoko, John's long hair -- which he had center-parted in a style resembling Yoko's -- his wealth, and his nerve at daring to cross over into the world of art. John was genuinely shocked and disappointed by all of this.

"The trouble, I suppose, is that I've spoiled my image," he confided to a reporter. "People want me to stay in their own bag. They want me to be lovable. But I was never that. Even at school I was just 'Lennon.' Nobody ever thought of me as cuddly!"

Worse, however, was to follow. Everywhere that John and Yoko went, people voiced their disapproval by shouting out, "Where's your wife?," "Chink!," and other presumptuous crudities. The press, of course, decided to jump on the bandwagon that it had started rolling by turning on the couple with unprecedented venom.

The attacks were both unwarranted and distasteful, often racist in tone; some openly described the love of John's life as "ugly." Because they were highly visible, John and Yoko had become easy targets. Unfortunately even some of the Beatles' fans went along with the ugly mood.

One girl, quoted by Philip Norman in Shout! The Beatles in Their Generation recalled standing with friends outside the EMI Studios in Abbey Road and handing Yoko a bunch of yellow roses, thorns first. Not realizing that this was intended as an insult, Yoko thanked them repeatedly and John said, "Well, it's about time someone did something decent to her."

The net effect of all this ill-will was to put severe strain on John and Yoko's relationship. What had started out as a misty-eyed love affair was quickly turning into a major ordeal, and adding to the pressure were the arguments that were beginning to crop up between all four Beatles during the recording sessions for their new album. Having recently taken a major step in his life, John was clearly going to have to take a few more in order to hold onto his sanity, as well as the love that he had waited so long for.

On August 22, 1968 Cynthia Lennon sued her husband for divorce on the grounds of his adultery with Yoko Ono. John did not contest the order.