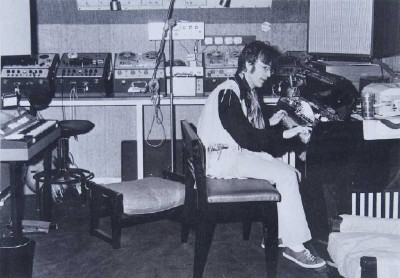 John Lennon at work in his home studio at Weybridge in 1967. It was here that he and Yoko Ono would later collaborate on the Two Virgins LP.

Over the course of 18 months starting in late 1966, Yoko Ono and John Lennon met on several occasions, and she would also keep in touch by sending cryptic, humorous notes, instructing him to "Breathe" or "Watch all the lights until dawn." At first, Yoko's antics were of passing interest to John, but eventually they had their effect. In time John found that Yoko occupied his thoughts with increasing frequency. Wife Cynthia Powell, meanwhile, was growing steadily more depressed about the fragile state of her marriage.

"Although John said very little about the impression I made as his wife, I always felt that he expected a great deal more of me," she later confessed in her 1978 memoir, A Twist of Lennon. "I really wasn't on his wavelength as much as he would have liked. He needed more encouragement and support for his way-out ideas."

On meeting Yoko, Cynthia felt that she had stumbled upon John's solution, even though he himself appeared to be totally ignorant of the possibilities. During an argument, Cynthia even went so far as to suggest that he would be "better off with that Yoko Ono," but John discarded this notion as ridiculous.

When Cynthia went away with friends to Greece in May of 1968, however, John's curiosity got the better of him and he invited Yoko to his Weybridge home. His childhood friend, Pete Shotton, who was by now employed as his personal assistant, was also staying there at the time; he went to bed early while the two prospective friends retired to John's small home studio, planning to "mess about with tapes" and make some recordings.

The next morning, Pete arose to be greeted by the sight of John sitting in the kitchen in his dressing gown, treating himself to a quick breakfast. Although he confirmed that he had spent a "great night" with Yoko, his mood was strangely quiet and serious, and if Pete sensed that he was building up to something, he didn't have to wait long to discover what it was: John wanted him to find a house that he and Yoko could go and live in!

"It was quite a stunner," recalls Pete. "He came out with this incredible revelation that this was what he'd been waiting for all his life. To hell with everything else, he'd go live in a tent with her if he had to. Here was a guy who was willing to take his entire past up to that moment and just throw it completely out of the window, because he had found what he wanted. I jumped up and said, 'Just like that?' and he said, 'Yeah, just like that. This is what I've been waiting for, Pete!'"

An earlier attempt by John to find peace of mind came in the form of learning the techniques and principles of Transcendental Meditation. Yet, a February 1968 trip to Rishikesh in India, studying under the Maharishi with the other Beatles, their partners and friends, ended in disillusionment when a rumor spread that the "Mystic One" had tried to force his untranscendental attentions on one of his students, actress Mia Farrow. Once again, John's hopes for a more settled life had been shattered.

"Having gone through all of the Beatlemania, the drugs, the Maharishi and so on, I saw him becoming, if anything, a more incomplete person," says Pete Shotton. "He was getting more and more frustrated with the fact that it wasn't providing him with any great satisfaction in life. And, of course, beyond any shadow of a doubt, the answer to all this was Yoko. She was, quite categorically, the best thing that ever happened to him."

Cynthia Lennon’s book of sensitively related memoirs found its way into print in 1978, despite John’s opposition to its publication.

In a piece that ultimately found its way into the 1986 book Skywriting By Word of Mouth, John himself described Yoko as "The only woman I'd ever met who was my equal in every way imaginable. My better, actually. Although I'd had numerous interesting 'affairs' in my previous incarnation, I'd never met anyone worth breaking up a happily married state of boredom for. Escape, at last! Someone to leave home for! Somewhere to go. I'd waited an eternity."

When Cynthia returned from her Greek vacation she found herself to be a stranger in her own home. John and Yoko were both there, clearly established as a couple, and there could be no doubt that the time for radical change had arrived. John, having made his decision, appeared totally at ease about the whole situation, and it was Cynthia, in fact, who packed her personal belongings and moved out.

"I didn't blame John and Yoko," Cynthia later asserted in A Twist of Lennon. "I understood their love. I knew I couldn't fight the unity of mind and body that they had with each other ... Yoko did not take John away from me, because he had never been mine. He had always been his own man and had always done his own thing ..."