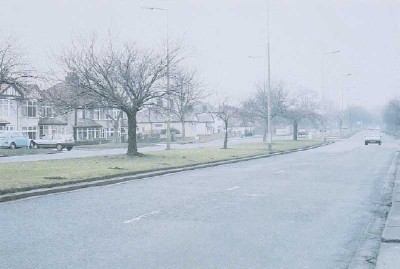 ©
Menlove Avenue in the Liverpool suburb of Woolton. It was on this street that John Lennon spent most of his childhood with his Aunt Mimi and Uncle George.

Approaching his mid-teens, John Lennon began to reestablish links with his mother, Julia Lennon, who was living less than two miles away from his Mendips home. Yet the renewal of one relationship coincided with the severing of another: his Uncle George Smith, the kindly ex-dairy farmer who provided the counterbalance to Aunt Mimi's strict rule -- the man who would humor John while his wife was punishing him, and the one who taught his nephew to read, took him for walks, and bought him a bike -- died from a hemorrhage on June 5, 1955, at the age of 52.

John was on a camping holiday in Scotland at the time, and when he returned home a couple of days later and learned of the news, he felt unsure how to express his shock and pain, and withdrew to the safety of his bedroom.

"Then my cousin Leila arrived," he recalled for biographer Hunter Davies, "and she came upstairs as well. We both had hysterics. We just laughed and laughed. I felt very guilty afterwards."

An offhand reaction to a traumatic situation was typical of John Lennon, for this habit would repeat itself time and again throughout the years. On the one hand extremely outgoing, he could at the same time be emotionally withdrawn, especially when it came to betraying signs of weakness. Responding with nervous laughter or simply clamming up was his way of protecting himself against further hurt. It wouldn't be until much later in life that he would begin to confront this problem.

Now, however, with Uncle George gone, his feeling of isolation from those around him intensified, for apart from the free-and-easy Julia and his small circle of close friends, few people in his life appeared to be functioning anywhere near his wavelength.

"It's scary when you're a child," he later reflected during a Playboy interview with David Sheff, "because there is nobody to relate to. ... What the hell do you do? You want to belong but you don't want to belong, because you cannot belong."

Richard Buskin A current shot of “Mendips” in Woolton, once the home of John Lennon. Today, the strategically positioned trees and shrubs block the view of sightseers.

As John became more resentful of the demands of his aunt, his school, and of society in general, he drew closer to his mother, whom he regarded almost as a big sister. He would spend weekends in the suburb of Allerton, at the house Julia shared with her boyfriend, John Dykins -- whose facial tic prompted the ever-sensitive John to christen him with the charming nickname of "Twitchy." Julia would join her son in ridiculing all those whom they considered to be "thickheads." But while it was easy to laugh at others, John still wasn't at all sure as to his own future.

"I didn't really know what I wanted to be, apart from ending up an eccentric millionaire," he remarked to biographer Hunter Davies. "I fancied marrying a millionairess and doing it that way. ... If I couldn't do it without being crooked, then I'd have to be crooked. But I was too much of a coward to be a crook. I'd never have made it."

So, in spite of everyone's best efforts to tie him down, the rebellious side of John's nature had surfaced. All he needed now was a cause that would give him a sense of direction. He found it in music.