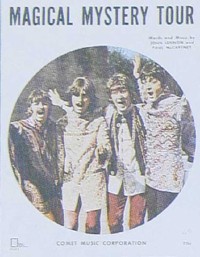 The movie that went along with "Magical Mystery Tour" was a failure for the Beatles.

After the 1967 death of Beatles manager Brian Epstein, Paul McCartney's answer was to urge the other three members of the group to press ahead with the project that he had been dreaming up, the Magical Mystery Tour television movie. The Beatles were to script, direct, and produce the film themselves, but without Brian's guiding hand this was a recipe for disaster. Musically, they hadn't yet put a foot wrong, but when it came to dealing with the world of cinema they were simply out of their range.

"[Paul] came and showed me what his idea was, and this is how it went ... the production and everything," John Lennon recalled for Rolling Stone interviewer Jann Wenner. "He said, 'Well, here's the segment, you write a little piece for that.' And I thought ... 'I've never made a film, what's he mean, write a script!' So I ran off and wrote the dream sequence for the fat woman, and all the things with the spaghetti and all that. It was like that."

Basically, what ended up appearing on British TV screens during the 1967 Christmas season was a psychedelic mishmash. Some of the ideas were horrible failures; others were ahead of their time, similar to the Monty Python brand of humor that was to take off during the next decade.

The only aspect of the production that really came up to scratch, of course, was the music, featuring several typically brilliant songs, not the least of which was John's surrealistic masterpiece, "I Am The Walrus." With this composition, John's wonderful talent for bizarre wordplay reached a peak. Drawing inspiration from newspaper stories, everyday occurrences, and favorite books such as Lewis Carroll's Alice's Adventures in Wonderland, he conjured up strange, disturbing images full of sophisticated little in-jokes. Indeed, many of the song's lines were pure nonsense:

"Crabalocker fishwife, pornographic priestess, boy you been a naughty girl, you let your knickers down"

In its entirety the song's effect remains fascinating. No ordinary mind could have devised it or assembled it in such startling fashion.

Yet, a film, undeniably, is made up of many elements, and music is only one of them. When Magical Mystery Tour was first screened, it was panned by the public and critics alike. Surprisingly, John appeared to be generally unfazed by this negative reaction, as though his identity as a Beatle was diminishing in importance. Bit by bit he was surrendering his leadership of the group, and allowing Paul to assume the role of chief motivator. John was just marking time, waiting for the next big thing to happen, the next new adventure.

In a 1980 interview, actor Victor Spinetti, who appeared with the Beatles in A Hard Day's Night, Help!, and Magical Mystery Tour, recalled an incident that took place in December of 1967, which gave a fair indication as to John's state of mind at around this time.

"We were just sitting around, talking and having a drink," Spinetti remembered, "and, referring to the weather, I made a casual remark about how cold it was. John looked at me and said, 'Well, Vic, let's go somewhere that's warmer, then!' Before I knew it, within an hour or so, we were sitting in the back of a car, on our way to the airport, en route to Morocco! Neither of us had a penny on us, but John didn't seem to care. He'd made his mind up, and now he was looking forward to the trip. I've got to admit, however, that when he said 'somewhere that's warmer,' I took him to mean another room, not another country!"

­ Free-thinking and impulsive, this kind of action was typical of John. Still, it couldn't hold a candle to the momentous decision that he was to make a few months later.