1967: John Lennon's Marriage Problems and the Death of Brian Epstein 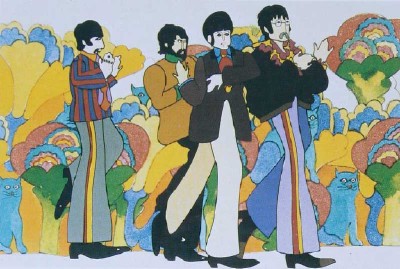 The psychedelic Yellow Submarine cartoon showed the direction John Lennon was heading -- away from wife Cynthia.

By the time Sgt. Pepper came out in 1967, the Beatles were wearing beads, bells, and brightly colored clothes; as if to press home the band's ultra-hip point of view, John Lennon even went as far as to have his Rolls-Royce painted in colorful psychedelic patterns.

On August 24, he and wife Cynthia, together with George and Patti Harrison, and Paul McCartney and girlfriend Jane Asher, attended a lecture on Transcendental Meditation given by the Maharishi Mahesh Yogi, at the Hilton Hotel on Park Lane in London. The following day, all of them, together with Ringo Starr, turned up at London's Euston Station in order to travel to Bangor in North Wales, where the Maharishi was to hold a weekend seminar.

But in the mad dash for the train, amid policemen, press men and hordes of onlookers, Cynthia was left behind on the platform. She tearfully regarded this inadvertent abandonment as an ominous sign of things to come.

Over the past couple of years, she and John had steadily been growing apart, due in no small part to the mental growth that her husband was experiencing through his reading, and through his use of LSD.

The drug had little effect on her, but it inspired John to move forward in new directions. In her 1978 book, A Twist of Lennon, Cynthia, the loyal housewife, recalled her feelings of helplessness on that August day in Euston Station:

"What nobody could possibly understand was that my tears were not because I had missed the stupid train, but they were expressing my heartfelt sadness. I knew that when I missed that train it was synonymous with all my premonitions for the future. I just knew in my heart, as I watched all the people that I loved fading into the hazy distance, that was to be my future."

Cynthia's feelings of impending doom appeared to be coming horribly true a couple of days later, when word filtered through from London that Brian Epstein had died in his bed from a barbiturate overdose. He had attempted suicide in 1966 and again in 1967, but because the drugs found in his body after his death were determined to have been ingested over time and not all at once, suicide now seemed unlikely. Whatever the case, the Beatles' tragically troubled manager was gone.

John, initially as shocked as everyone else by the news, knew that this tragedy spelled possible disaster for the Beatles. Regardless, his emotional reaction echoed the response he had years before, when he learned of the deaths of Uncle George Smith and early Beatles bassist Stuart Sutcliffe.

"[It's] the feeling that anybody has when somebody close to them dies," he explained to Rolling Stone's Jann Wenner in 1970. "There is a sort of little hysterical, sort of 'Hee, hee, I'm glad it's not me' ... you know? That funny feeling when somebody dies. I don't know whether you've had it, I've had a lot of people die on me. And the other feeling is 'What?' ... You know, 'What can I do?' "

The Maharishi offered his own advice on dealing with loss. As John recounted to TV cameras at the time, the Maharishi told the Beatles "not to get overwhelmed by grief, and whatever thoughts we have of Brian, to keep them happy, because any thoughts we have of him will travel to him wherever he is." The irony was that Brian Epstein, the man who believed in the combined magic of John, Paul, George, and Ringo, died at the precise moment when they were learning a philosophy enabling them to survive as individuals.