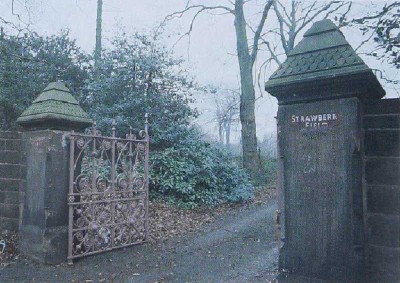 ©
The entrance to Strawberry Field, the Salvation Army home whose summer fetes were attended by John Lennon and his friends in the late ’40s and early ’50s.

In addition to everything contained on the vinyl disc, Sgt. Pepper's Lonely Hearts Club Band also boasted a trend-setting album sleeve, with song lyrics printed on the back (a first), and a front-cover photograph of the Beatles standing in front of a collage of many people whom they considered to be either noteworthy or notorious.

These ranged from Hollywood figures Marilyn Monroe, Mae West, and Marlon Brando, to such disparate personalities as deceased Beatles bassist Stuart Sutcliffe, Bob Dylan, and Oliver Hardy. Inevitably, John had a few other ideas -- prize choices that, in the name of good taste, had to be refused or removed from the final setup: Mahatma Gandhi, Jesus Christ, and Adolf Hitler!

In a 1987 interview, the former Director of EMI Records (UK) L. G. Wood recalled visiting Paul McCartney's house in St. John's Wood, North London (around the corner from Abbey Road Studios), in order to discuss some of the album-cover problems with both him and John. Clearly, the scene that greeted Wood was intended as a good-natured put-on by the two irreverent stars.

"I went into the living room, and there they both were; John was sitting on the end of a couch with a floppy hat on, and doing a bit of knitting -- what he was knitting I don't know -- and they sat me in a chair, with a colored spotlight shining straight in my eyes! Their attitude was 'Oh, come on then Len, what appears to be the trouble?,' and so I explained to them the problem with using Gandhi and so forth, but of course I ended up leaving them that afternoon really having got nowhere at all!"

Matters were eventually agreed upon, however, and when the album found its way into the record shops in June of 1967, both the disc and its sleeve heralded the start of a new era. The Beatles, for their part, marked the era by sporting their newly sprouted moustaches, and John departed altogether from the Fab Four look by finally getting rid of his contact lenses and donning circular-framed granny glasses. Hereafter, these would become a famous part of the Lennon image, having previously been worn by him in a short sequence of the Help! movie, and throughout the filming of How I Won the War.

John was now in the midst of a period of unbelievable creativity, not only in terms of quantity, but more importantly with regard to quality. The first track recorded for the Sgt. Pepper album, but instead released as a single, was the magnificent "Strawberry Fields Forever," in which John drew on his childhood memories and recounted them as if through a drug-induced haze.

Strawberry Field was, in fact, a Salvation Army home in Liverpool, situated around the corner from the Menlove Avenue house in which John had been raised. He and his school friends would visit the public functions held there each summer; using these experiences as a starting point, John used the song to relate his feelings of loneliness as a youth.

As he explained to David Sheff in a 1980 interview with Playboy, ''The line says, 'No one I think is in my tree, I mean it must be high or low, What I'm saying, in my insecure way, is 'Nobody seems to understand where I'm coming from. I seem to see things in a different way from most people.' ... At 13, 14, I would think, 'Yes ... I am seeing [somebody's] subconscious; I can read his mind; I'm picking up things he doesn't even know exist. ...' It isn't egomania. It's a fact. ... It doesn't make me better or worse than anybody else; I just see and hear differently from other people, the same way musicians hear music differently from non-musicians. And there is no way of explaining it. ..."

Almost as difficult to explain was the way in which two versions of "Strawberry Fields Forever" -- in different keys and different tempos -- were spliced together and matched perfectly. John had the idea of joining the first half of the slow version to the second half of the faster one; the only problem was, he didn't have a clue how.

Yet when producer George Martin and engineer Geoff Emerick experimented with speeding up one tape and slowing down the other, they found, miraculously, that the different keys came together. Once again, John's insistence on attempting the impossible -- along with the invaluable technical assistance of Martin and Emerick -- had produced incredible results.

After the release of Sgt. Pepper John displayed another side to his songwriting talents: the ability, when required, to turn out an instantly memorable anthem. In this case, the need arose out of a television program called Our World, being broadcast live on June 25, 1967, to an estimated worldwide audience of 400 million people on five continents. The Beatles were to represent Britain in the show, and their task was to come up with a new song, simple enough for people anywhere on Earth to understand.

Things were left until almost the last minute, at which point John said, "Oh God, is it that close? I suppose we'd better write something," and came up with "All You Need Is Love." This number, relaying the basic message that, no matter life's problems, "It's easy/All you need is love," was not only adopted as the theme of the "flower power" generation of '67, but has also since become symbolic of the entire decade. Not bad for a spot of quick work!