Sgt. Pepper and John Lennon's Lyrics for a Generation 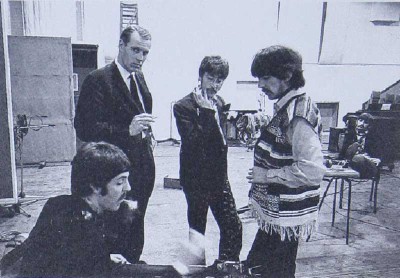 Producer George Martin keeps his eyes on the camera, while “the boys” listen to Paul’s run-through of a bass part during the Sgt. Pepper sessions.

Losing just a little of his enthusiasm for the Beatles after years of the whirlwind lifestyle, John Lennon nevertheless wasn't yet sure of who or what else he could focus his attention on, and so at the end of 1966 he threw himself wholeheartedly into the group's next project, the recording of the landmark Sgt. Pepper's Lonely Hearts Club Band album.

This was to set revolutionary new standards in terms of the long-playing record, until that time usually a random collection of commercial songs, some more memorable than others, utilized by the record companies as a straightforward means of gaining more exposure and income for both the artists and themselves.

Sgt. Pepper, on the other hand, was built around the novel concept of the Lonely Hearts Club Band (guess who) performing a show in front of a live audience. Although many of the album's songs were not originally composed with this idea in mind, the LP was cleverly packaged so that each cut appeared to fit the format. Overdubbed audience noise added to the overall effect, and these were supplemented by various other sound effects which helped give the record a uniquely fresh and unified atmosphere.

The songs themselves concentrated on a wide variety of subjects that would interest people of the Beatles' age group -- sex, drugs, religion, the generation gap -- and among John's contributions were some of his strongest compositions to date: One of them, "Being For The Benefit Of Mr. Kite!," featured song lyrics adapted in surreal fashion from a Victorian fairground poster that John had purchased some time before, backed with strange, swirling carousel organ sounds.

"Lucy in the Sky with Diamonds," on the other hand, was a psychedelic musical pastiche that described "tangerine trees," "marmalade skies," "cellophane flowers," "looking glass ties," "newspaper taxis," and "a girl with kaleidoscope eyes." Yet, contrary to popular myth, John always insisted it was pure coincidence that the initials in the song title spelled "LSD."

Instead, the idea for the composition had come from a drawing his son Julian had brought home from school one day, portraying a girl in his class. "What is it?" inquired John. "It's Lucy in the sky with diamonds," came the not-yet 4-year-old's reply, providing the perfect offbeat inspiration for his father.

The album's clincher, however, was its final track. "A Day In The Life," penned mostly by John, together with a short passage in the middle by Paul. This rock masterpiece, viewed by some critics as nothing less than a vision of the "Day of Judgment," featured overt drug and sexual references, tidbits of stories that John had heard or read about in newspaper articles, and a 40-piece orchestra providing a finale that had to be, as John put it, "a sound building up from nothing to the end of the world." The overall effect was (and remains) breathtaking and confirmed that its composer's remarkable musical vision put him in a popular-music class all of his own.