1966: John Lennon and the Downside to Fame 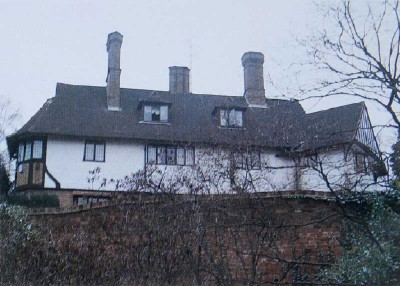 ©Richard Buskin "Kenwood" is the luxury home where John, Cynthia and Julian Lennon lived throughout the Beatlemania years.

After the Beatles became popular, John Lennon was increasingly becoming a home- and studio-bound musician; the idea of touring was turning into a major headache. By 1966, the Beatles' live performances were, for the most part, pretty tired and lackluster, but there was good reason for this. While their growth as concert artists had been stilted by the screams, the oversized venues, and a strict 30-minute format, their recordings were getting ever more sophisticated and complicated.

The situation was, therefore, totally ridiculous: The band that was putting together works of art the caliber of "Eleanor Rigby," "I'm Only Sleeping," and "Tomorrow Never Knows" for the Revolver album was at the same time still giving the public unending live performances of less progressive songs such as "Yesterday" and "I Wanna Be Your Man." The band's studio work was difficult to reproduce on stage during those days of relatively primitive concert equipment, and besides, many of the teenage fans had come to shriek, not to listen.

If the Beatles, then, were undecided as to whether or not they should tour again after 1966, two unsavory episodes helped make their minds up for them: First, while visiting the Philippines, Imelda Marcos, wife of the country's dictator-leader, claimed that the band had snubbed her invitation to the royal palace.

The fact that they weren't even aware of the invitation didn't seem to matter. The Philippine media turned on the group, death threats were made, security forces were withdrawn, and when the Beatles and their entourage arrived at Manila International Airport in order to leave the country, they were kicked, punched, and jostled to the ground. Once they had made it to the aircraft, "immigration problems" delayed take-off, but in the end everything was sorted out and the distressed party continued on its journey.

As if all this wasn't enough, worse death threats were to follow, both for the Beatles in general and John in particular. This time around, John had managed to single himself out by way of an "in-depth" interview that he gave to journalist friend Maureen Cleave, published in the London Evening Standard on March 4, 1966. In it, he described his Weybridge lifestyle, his interests in art and reading, and expressed his views on money, politics, and religion.

Influenced by many of the books that he had been reading on the latter subject, John pointed out how the role of the church was dwindling within society, and how people were turning more and more toward material rather than spiritual possessions: "Christianity will go. It will vanish and shrink. I needn't argue about that; I'm right and I will be proved right. We're more popular than Jesus now; I don't know which will go first -- rock 'n' roll or Christianity. Jesus was all right but his disciples were thick and ordinary. It's them twisting it that ruins it for me."

Within its true context this was hardly sacrilegious. If anything, John was condemning a situation whereby more people were going to Beatles concerts than attending church. As such, the article appeared and was fairly quickly forgotten ... or so it seemed. On July 29, the American teen magazine, Datebook, reproduced the piece with one notable difference: The banner headline incorrectly paraphrased John as saying that the Beatles were greater than Jesus.

The Revolver album pushed the limits of John Lennon's, and the Beatles', creative talents.

This was all that was needed for conservative Americans to raise their voices to denounce the devil-worshiping Beatle. Birmingham, Alabama's WAQY radio led the way as 22 stations banned the broadcasting of Beatles music on their airwaves (never mind that many of the participating stations never even played it in the first place!), and organized several public "Beatles bonfires" at which records, books, and other merchandise relating to the group were tossed into the flames by people smiling into the assembled press and TV cameras.

Assassination threats were made by some of John's more fervent critics, as were boasts by the Ku Klux Klan that they would disrupt the Beatles' forthcoming U.S. tour. On August 6, 1966, Beatles manager Brian Epstein flew to New York to host a press conference aimed at diffusing the controversy and clarifying John's remarks.

But this wasn't enough, and so on August 11, over five months since the interview had been originally published, John and the other Beatles faced the cameras and microphones at the Astor Towers Hotel in Chicago, prior to their two concerts in that city the following day.

In his hotel room before the press conference, John had actually wilted under the immense pressure and, in a rare show of weakness, openly broken down and cried. Now, however, he pulled himself together, and tried to explain his position:

"You know, I'm not saying that we're better or greater, or comparing us with Jesus Christ as a person or God as a thing or whatever it is. I just said what I said and it was wrong, or was taken wrong, and now it's all this. ...

"When I was talking about it, it was very close and intimate with this person that I knew who happened to be a reporter, and I was using expressions on things that I'd just read and derived about Christianity, only I was saying it in the simplest form that I know, which is the natural way I talk."

This seemed clear enough. Still, one journalist reasoned, he hadn't yet said the magic word: "Sorry." John, although understandably reluctant to do so, was eventually worn down. In the end, he gave in and made the apology that the newsmen were waiting for. Now they were happy, and the whole ridiculous affair could be put to one side.