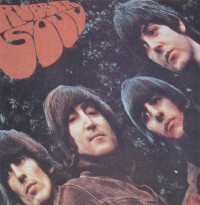 Rubber Soul signaled the growing maturity of John Lennon and Paul McCartney as songwriters and the Beatles as musicians.

On June 12, 1965 it was announced that, purportedly for their services to British industry, the Beatles were to be made Members of the Most Excellent Order of the British Empire (MBE), and on October 26 they received their medals from the Queen in an investiture ceremony at Buckingham Palace.

Having originally observed that "I thought you had to drive tanks and win wars to get the MBE," John Lennon later confessed that he had seriously considered declining the award, before deciding to go along with it. This way, at least, he would annoy those who had expressed outrage at such an honor being bestowed on "mere pop stars."

"I really think the Queen believes in it all," he said to biographer Hunter Davies, author of The Beatles. "She must. I don't believe in John Lennon, Beatle, being any different from anyone else, because I know he's not ... I always hated all the social things. All the horrible events and presentations we had to go to. All false. You could see right through them all, and all the people there. I despised them."

In the meantime, John played the part of the happily married husband and father. Wife Cynthia and son Julian, initially kept in the background, had now come out into the open and family portraits of the three together would frequently appear in newspapers and magazines. In reality, however, John was just drifting, for this was a situation that he found himself in rather than one he would have opted for.

When home, all he really wanted to do was relax and retreat into himself. Alternately watching TV, gazing out of the window, or reading the books of Swift, Tennyson, Huxley, Orwell, Tolstoy, and Wilde, he rarely got into deep conversations with his wife or played at length with his son.

He would, however, feel guilty about his inattention when away on tour, confiding his thoughts in long letters to Cynthia. What he didn't reveal, however, was that his main distractions on the road -- as with the other Beatles -- were the girls who hung around the band, and an increasing supply of soft and hard drugs.

"'Norwegian Wood' [on the Rubber Soul album] was about an affair I was having," he later admitted to Playboy interviewer David Sheff. "I was very careful and paranoid because I didn't want my wife, Cyn, to know that there really was something going on outside of the household. ... I was trying to be sophisticated in writing about an affair, but in such a smokescreen way that you couldn't tell."

So it is that in the song, after opening with the line: "I once had a girl, or should I say, she once had me," and then telling us:

"I sat on a rug, biding my time, drinking her wine We talked until two, and then she said, 'It's time for bed' "

John then cops out by killing the romantic scene and injecting it with some offbeat humor:

"She told me she worked in the morning and started to laugh I told her I didn't, and crawled off to sleep in the bath"

Clearly, then, even though one side of John wanted to keep his privacy, his other, artistic side felt compelled to tell the truth. This would become increasingly apparent over the next few years, highlighting the widening gap between his style of songwriting and that of Paul McCartney.

The Rubber Soul album was, in fact, the first clear indication of John's growing maturity as a songwriter, for apart from "Norwegian Wood" he also contributed true classics such as "Girl," the retrospective "In My Life," and the autobiographical "Nowhere Man." These are the sort of mid-period Lennon/Beatle numbers that, since his death, have been the most frequently played radio-reminders of him. Furthermore, John's recollections of how he wrote them also helps emphasize the often inspirational nature of his talent:

"'Nowhere Man' ... I'd spent five hours that morning trying to write a song that was meaningful and good," he told Playboy interviewer David Sheff, "and I finally gave up and lay down. Then 'Nowhere Man' came, words and music, the whole damn thing, as I lay down. The same with 'In My Life'! I'd struggled for days and hours trying to write clever lyrics. Then I gave up and 'In My Life' came to me. So letting it go is what the whole game is."