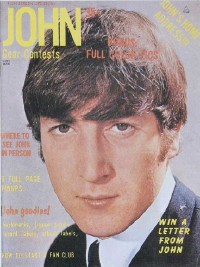 Beneath his public face, John Lennon was growing increasingly frustrated

As he became more and more disillusioned with fame, regarding it as superficial and feeling suffocated by it, so John Lennon excelled at writing songs in the mid-1960s that operated on two levels: On the one hand, they were bouncy numbers in the best boy-loses-girl tradition, aimed to satisfy the public's taste; on the other, they contained small insights into his private insecurities.

An early example of this was the self-pitying "I'm a Loser," on the Beatles For Sale album, released in Britain at the end of 1964:

At the time, with Beatlemania at its height, few people -- if any -- would have noted the true significance of these words, dropped into the middle of just another catchy number about the heartaches of love. Yet they were written when a constantly packed work schedule was really beginning to catch up with all four members of the group.

A non-stop round of television, radio, and film assignments, recording sessions, personal appearances, and concerts around the globe was taking its toll. What had once been fun was now rapidly turning into a sheer money-making exercise.

By 1965, matters were getting worse. John and George Harrison, in particular, were growing tired of performing live to hordes of screaming girls who couldn't even hear their music, let alone see them. What's more, with only a few small amplifiers on the stage, the Beatles could hardly hear themselves, with the result that the overall sound was usually atrocious.

Adding to the boredom, for reasons of their own security they saw hardly anything of the countries that they were visiting; when not working, they were confined to their hotel rooms, so their lives became a dreary succession of airports, hotels, and performance venues. In "Help!," the title song of the Beatles' second movie (directed, like their first, by Richard Lester), John came straight to the point.

"The whole Beatle thing was just beyond comprehension," he told Playboy magazine in 1980. "I was eating and drinking like a pig and I was fat as a pig, dissatisfied with myself, and subconsciously I was crying for help. I think everything comes out in the songs. ...

"When Help! came out, I was actually crying out for help. Most people think it's just a fast rock 'n' roll song. I didn't realize it at the time; I just wrote the song because I was commissioned to write it for the movie. But later, I knew I was really crying out for help. So it was my fat Elvis period. You see the movie: He -- I -- is very fat, very insecure, and he's completely lost himself. And I am singing about when I was so much younger and all the rest, looking back at how easy it was."

A lobby card promoting Help! The film was originally titled Eight Arms to Hold You but was changed to match the name of a Lennon song.

To add to the confusion, John's long-lost father, Freddie Lennon, now decided that this was a convenient time to make his grand reappearance. Employed to wash dishes in a hotel situated only a few miles away from John's Weybridge home, he turned up on his son's doorstep looking like a Bowery bum, dearly in search of a handout. This didn't exactly tie in with John's childhood image of him, as a swashbuckling hero sailing the seven seas.

"Where have you been for the last 20 years?" was the younger Lennon's natural reaction, prompting Freddie to really turn on the hard-luck story: John's mother Julia had deserted him, friends and relatives didn't want to know, and somehow, even though he had made good money both as a ship's steward and as a hotel porter, he didn't have two coins to rub together.

John had little time for all this, but right now he was prepared to call an uneasy truce, give Freddie some money, and send him on his way. Yet, the next development in the saga of his "old man" was enough to make John cringe even more: Showing that music was in the blood, "The Ignoble Alf," as his son chose to christen him, released his first (and thankfully only) single, entitled "That's My Life (My Love And My Home)."

John, of course, was horribly embarrassed to see all of the coverage that Freddie's record attracted in the music and national press, but at least he had no fears about the competition. Music may have been in the blood, but the talent clearly was not.