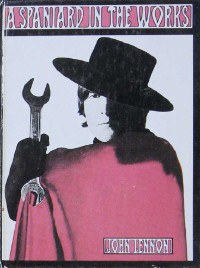 Pressured to write another book after the success of "In His Own Write," John Lennon released "A Spaniard in the Works" by July of 1965.

One lone voice, going against the tide of popular opinion during Beatlemania, was that of the British politician Charles Curran, who stood up in Parliament and cited John Lennon's poetry book In His Own Write as ample evidence of how poor was the standard of education in Liverpool.

Needless to say, nobody took this too seriously, and the following year John would put pen to paper in order to come up with a second volume, called A Spaniard in the Works, featuring the likes of Harassed Wilsod (British Prime Minister, Harold Wilson), Sir Alice Doubtless-Whom (ex-Prime Minister, Sir Alec Douglas-Home), and assorted cartoons including one portraying a blind man wearing dark glasses, being led by his guide dog, also wearing dark glasses!

L.G. Wood, a former Managing Director of EMI Records, laughed as he recalled how John invariably showed little respect for authority, adopting a familiar attitude with people no matter how high-ranking their position.

"EMI's Chairman, Sir Joseph Lockwood, was a first class man at handling artists, and every now and then he would throw a dinner at the Connaught [Hotel]," Wood remembered, "inviting the Beatles and their wives or girlfriends, George and Judy Martin, and me and my wife. Now I, along with everyone else, would always address him as 'Sir Joseph,' but the Beatles, of course, would just call him 'Joe,' and I remember one occasion when we were all leaving the Connaught, and John came rushing back in and shouted right across the restaurant, 'Joe, get your bloody Rolls-Royce out of the way!' He had absolutely no concern for the fact that he was talking to the Chairman of a massive great company like EMI! He really was a very natural fellow."

Yet while he was enjoying the initial trappings of success, John was feeling less and less inclined to conform to the image that manager Brian Epstein, together with the press, had created for the Beatles. He felt that his individuality was being stifled, and so he turned increasingly to his art in order to vent his frustrations.

By 1964, the immense public attention was starting to wear on John Lennon.

"I was already a stylized songwriter on the first album," he later told Rolling Stone's Jann Wenner. "But to express myself I would write Spaniard in the Works or In His Own Write, the personal stories which were expressive of my personal emotions. I'd have a separate songwriting John Lennon who wrote songs for the sort of meat market, and I didn't consider them -- the lyrics or anything -- to have any depth at all. They were just a joke. Then I started being me about the songs, not writing them objectively, but subjectively." It was at this stage, when lyrics describing less than happy emotions began to creep into his songs, that people close to John started to realize that his life was not progressing as satisfyingly as it seemed. Indeed, by the end of 1964 the novelty of superstardom was already beginning to wear off.