Musician Published: John Lennon Compiles 'In His Own Write' 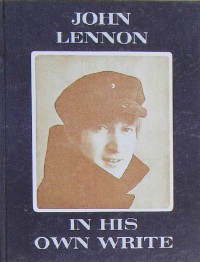 Fans and literary critics were delighted with John’s first book, a collection of poems, prose and drawings published in early 1964.

In early 1964, urged on by Beatles manager Brian Epstein, John Lennon delved back into his past to come up with a volume of his poems and drawings, called In His Own Write. (This title had been thought up by Paul McCartney, whose original idea, In His Own Write and Draw -- a pun on "right hand drawer" -- was considered too complicated.)

Meanwhile, the stack of John's work that art school friend Bill Harry had tucked away in his own drawer had been lost when his magazine, MerseyBeat, had moved its offices. Therefore, when John contacted him to ask for it back, Bill had to set off around Liverpool in order to track down what he could find.

"I managed to trace Rod Murray, who had shared the flat in Gambier Terrace with John and Stuart [Sutcliffe]," recalls Bill. "He told me that when they had left the place to go to Hamburg, they did so without paying their share of the rent, and so Rod was left to pay this for them. Among John's belongings, however, he had found his exercise book -- The Daily Howl -- and he told me that he would return this when he got the money he was owed in back rent. I relayed this message to Brian Epstein, and he in turn got his solicitor on the case and got The Daily Howl back."

Rod Murray had his money, John had much of the material that he needed for his book, and so everyone was happy. But Rod had been shrewd. On August 30, 1984, another unique copy of The Daily Howl surfaced at an auction at Sotheby's in London, and fetched a staggering £16,000 ($30,000). The vendor? A certain Rod Murray!

In His Own Write, with its nonsense prose, loony poems, daft drawings, and sharp wit, shot straight to the top of the bestseller lists, and drew solid praise from even the most respected of critics: "It is worth the attention of anyone who fears for the impoverishment of the English language and the British imagination," asserted The Times Literary Supplement.

Certainly, it chose as its subjects many well-known personalities and issues of the day -- television celebrities, politicians, political events -- and sent-up them all with great style. Satire was John's specialty, and in his humorous way he had a dig at serious topics such as racism, social injustice, and family conflict.

Therefore, when he attended the Foyle's Literary Luncheon held in his honor at London's Dorchester Hotel in April of 1964, everyone naturally expected John to make a typically hilarious speech, full of jokes and wisecracks. This, after all, was the man who, in his book, referred to Princess Margaret as Priceless Margarine, the Duke of Edinburgh as the Duck of Edincalvert, and President de Gaulle as Prevelant ze Gaute.

All they got, however, were a few mumbled words: "Thank you very much, God bless you," (transformed by the press into the more offbeat "Thank you, you have a lucky face"!)

While those present were disappointed by John's reluctance to speak, what they didn't know was that the "brainy Beatle" was suffering from a hangover as the result of some heavy partying the night before, and he didn't even realize that he would have to make a speech. Still, all this did for most people was confirm that he was excitingly different ("You never know what he's going to do next!"). Aristocrats jostled with the general public outside the Dorchester, trying to get John's autograph.