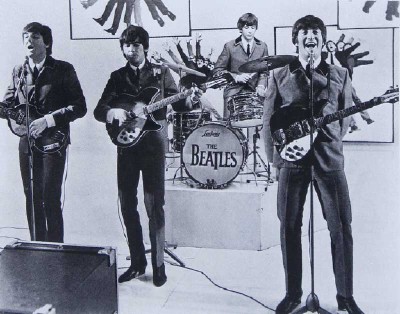 The Beatles perform "Tell Me Why" during the concert sequence near the end of A Hard Day’s Night.

Certainly, for the most part, John Lennon was a press agent's dream -- the one who, when faced with a microphone, a camera, or an audience, would inevitably come up with a witty remark. It was he who invited the Royals to rattle their jewelry at the Royal Command Performance, who autographed a fan's concert program "Sodoffy from John Leper," and who responded like lightning to the reporters' questions when the Beatles arrived at Kennedy Airport, New York, on February 7, 1964.

Q: "Why does your music excite people so much?"

John: "If we knew, we'd form another group and be managers."

Q: "Was your family in show business?"

John: "No, but I'm told my dad was a great performer."

Retorts like these confirmed to the American public that the Beatles would more than live up to all the publicity hype that had preceded their arrival in the U.S.; the group's subsequent appearance on CBS-TV's The Ed Sullivan Show put them over the top in America. Not only did they make great records and have strange haircuts, but they also had interesting personalities, none more so than John.

"Looking back on it with John, you know, he was a really great guy," Paul McCartney told Rolling Stone in 1987. "I always idolized him. We always did, the group. ... He was like our own little Elvis in the group. Not because of his good looks or his singing -- although he was a great singer -- just his personality. He was just a great guy. Very forceful guy. Very funny guy. Very bright and always someone for us to look up to."

Musically, by the time the Beatles hit America they were in full flow, and the group was riding the crest of a wave on the back of new Lennon-McCartney hits such as "I Want To Hold Your Hand," "She Loves You," "All My Loving," and "From Me To You." These were phenomenal compositions coming from a pair of young unknowns.

Equally remarkable was the Beatles' standard of musicianship on these records, thanks in no small part to the polished contribution of producer George Martin. Listening to these tracks, it is almost unthinkable that it is the same group that had performed in such shoddy fashion on the (since widely bootlegged) Decca audition tape just a couple years earlier.

John, for his part, contributed the distinctive harmonica sound that characterized many of the early Beatles recordings, as well as piano and rhythm guitar. As a guitarist he was never quite in the league of George Harrison -- or, for that matter, Paul -- but he nevertheless turned in some memorable performances: That's John playing the super-fast chords ("triplets") throughout "All My Loving," really helping to drive the song along.

The single shown above is one of many bootleg issues of the ragged material the Beatles had prepared for their audition with Decca in 1962.

John's main musical asset, however, was of course his tremendous rock voice, full of energy and raw aggression. Paul was by no means an also-ran in this department either, as evidenced by his fantastic renditions of numbers such as Little Richard's "Long Tall Sally" but in John he was up against one of the all-time great rock 'n' roll vocalists.

During the first three years of the group's wide-scale popularity the Lennon vocal cords would be put to remarkable -- and strenuous -- use on a string of solid cover versions of old favorites, including "Twist and Shout," "Money," "Slow Down", "Rock and Roll Music," "Bad Boy," and "Dizzy Miss Lizzy."

The manner in which he attacked these songs -- moving between a low-pitched growl and a full-tilt scream -- was unsurpassable, and he also displayed superb range and versatility. Not that he himself acknowledged this, for as with many other famous singers John was often embarrassed by the sound of his own voice, and he would ask George Martin to tone it down in the mix in order to cover up what he regarded as his inadequacies.

"Listen to 'Twist and Shout,' " he told Jann Wenner in a Rolling Stone interview in 1970. "I couldn't sing the damn thing, I was just screaming." Never mind that he had turned in what is widely regarded as a legendary performance, recorded in just one take! Countless rock vocalists have wished they could "scream" half as well.

As Beatlemania went into overdrive, as British popularity turned into international fame, and as each of the Fab Four became household names, John took everything in his stride. He sailed through The Beatles' first -- and best -- film, A Hard Day's Night, won over the hearts and minds of the people in the street and those in the royal palace, and all the time tried to remain true to himself.

A Hard Day's Night turned the Beatles into bona fide movie stars, and brought an added dimension to their fame. Directed in a breezy, freewheeling style by an expatriate American, Richard Lester, the film chronicled the group's adventures on a supposedly typical day. The movie was a critical success and a box-office smash, and helped to solidify the Beatles' happy, irreverent image. Beatlemania grew even more robust than before.

John was constantly amused and bemused by the power that the Beatles held over their loyal fans, and he would regularly poke fun at this by going into his "Hitler routine": Appearing on hotel balconies, holding a comb over his top lip and giving a Nazi-style salute to the crowds below; and, when about to introduce the next song during a concert, shaking his hands in the air, looking up to the heavens and shouting out a stream of unintelligible words. At other times, he would simply order the thousands of screaming girls to "shut up!"