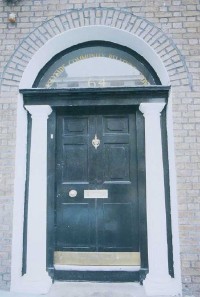 For John Lennon, facing up to his responsibilities for getting his girlfriend, Cynthia Powell, pregnant was one thing, but facing up to his Aunt Mimi Smith was quite another. Tempted toward cowardice once again, John realized that trying to avoid the unavoidable was useless. He therefore informed her of the situation and then had to shield himself from the moans and screams about "this disgusting carry-on," as well as put up with her refusal to attend the wedding.

Mimi didn't realize what she would be missing. When the big day arrived, August 23, 1962, the scene that greeted bride Cynthia Powell inside the registry office more closely resembled a funeral. John, Paul McCartney, and George Harrison, wearing black suits, white shirts, and black ties, all looked pale and nervous, the registrar appeared as happy as an undertaker, and Cynthia's brother and sister-in-law seemed unsure about the whole situation.

What was needed here was something to liven up the atmosphere, and it wasn't long in arriving. As soon as the marriage service began, a workman outside took this as his cue to go mad with his pneumatic drill! Not a word could be heard inside the office, and so as soon as the vows had been taken and the forms signed, the small party, led by Beatles manager Brian Epstein, braved the rain outside and rushed around the corner for the wedding "reception."

This, in actual fact, took place in the less than magnificent setting of Reece's Cafe, a crowded snack bar that offered the newlyweds and their guests a memorable menu of soup, roast chicken, and trifle (fruit and custard spongecake), washed down with glasses of delicious water. Brian paid for the meal, and as a wedding gift he offered the couple his nicely furnished apartment, which was situated near to the Art College.

One thing was for sure: Nobody who was present that day would ever forget it. Least of all John, for as Cynthia accurately observed in A Twist of Lennon, referring to the noise of the pneumatic drill, John "had not only gained a headache, he had gained a wife and the promise of a child in only eight months -- possibly a bigger headache."

As it turned out, there would be plenty of other things to occupy John's mind in the meantime, not the least of which was the career problem of being a married teenage idol. John was worried that this conflict of image might ground his career just as it was about to take off, and so for the next couple of years Cynthia and child would remain firmly in the background.