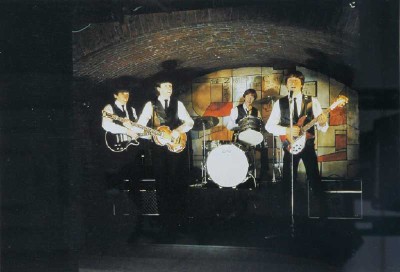 ©
A faithful reproduction of The Beatles performing at The Cavern Club in 1962, as displayed at the Liverpool-based exhibition, The Beatles Story.

In Liverpool in 1961, Beatles gigs at The Cavern were enabling John Lennon to perfect his all-around appearance as well as his banter with the audience. Here was born the famous Lennon stance: legs apart, head arched back, and guitar held up to the chest, largely a result of his extreme short-sightedness when not wearing his glasses on stage. Unable to gauge the reactions of those sitting facing him, John felt safest when projecting his well-practiced tough guy image.

The customers, of course, were mainly Liverpool locals, but they, like many of those in Hamburg during the Beatles' 1960 tour, were still subjected to John's hard-bitten humor, as well as his priceless ability to turn any situation upside down on its head.

The Lennon wit persevered -- no matter that The Cavern was a dark, damp, musty cellar, with limited space and even more limited facilities. The wiring was hardly up to present-day safety standards (not to mention early-'60s safety standards), and with sweat quite literally dripping down the walls, it was not unusual for the musical equipment to short-circuit.

Keef Hartley, who would later be a drummer with Rory Storm and the Hurricanes, John Mayall's Bluesbreakers, and his own Keef Hartley Band, was occasionally among the kids who were crammed together, watching the Beatles perform at the club. In an interview in 1981, he recalled John's method of coping with the poor conditions.

"The electrics weren't the best thing that happened at The Cavern, and either the amps would pack up or there would be a complete power cut. If this happened, John would immediately jump up onto the piano and go into this routine: 'And here we have so-and-so, who's in a string bag ... no arms, no legs,' and he would introduce McCartney. It was completely unrehearsed, but at the same time it was 'instant Lennon,' with that sick, sick humor of his! That gave the Beatles a tremendous advantage over all of the other bands, and I'm sure that people who went regularly to The Cavern were almost more entertained by that than by the live music."

While the girls were at the same time in awe of John and somewhat scared of his sharp tongue, the guys admired his manliness; he became for them something of a role model. Either way he had a magnetic presence, and one person who was immediately drawn toward this was Brian Epstein, who first saw the Beatles perform during a lunchtime session at The Cavern on November 9, 1961.

Epstein, the manager of a large record store in the center of Liverpool, was, as has been well documented, a homosexual who was helplessly attracted to John, the macho rocker who swore on stage, smoked while playing, turned his back on the audience, and stopped in the middle of a song whenever he felt like it. This was, however, by no means the only reason for Brian's interest in the group.

"I was immediately struck by their music, their beat, and their sense of humor, actually, on stage," he asserted in a 1963 BBC Television interview. "And even afterwards, when I met them, I was struck again by their personal charm, and it was there that really it all started."

Certainly it did. Epstein, a suave, sophisticated businessman who harbored frustrated showbiz ambitions, moved quickly to take the Beatles under his wing, resolving to smooth out their image, curb their lack of professionalism, and gain them a recording contract through his contacts in the record industry.

A bootleg pressing of "I'm Sure to Fail," one of the numbers recorded by the Beatles for their unsuccessful Decca Records audition on New Year’s Day, 1962.

During their second business meeting, while the other band members were hesitating over whether or not to take up Epstein on his offer, it was John, the leader, as decisive and straightforward as ever, who stepped forward and said, "Right then, Brian, manage us now. Where's the contract? I'll sign it."

Sure enough, after the leather gear had been discarded and the Beatles outfitted in suits, shirts, and ties, Epstein began to gain more prestigious local bookings for them. John, never one to conform to the rules, felt duty-bound to rebel against this restyling, and so like a naughty schoolboy he would walk around with his tie crooked and top shirt button undone. Underneath this show of defiance, however, he obviously recognized the good sense in Brian's actions, otherwise he wouldn't have put up with them.

A series of record company refusals during the first months of 1962 sorely tested the band members' faith, but Epstein delivered on his promise when, on May 9, he informed them that he had secured a recording contract with EMI's Parlophone label. The Beatles were in the middle of a seven-week season at The Star-Club in Hamburg when they received the good news, but for John this was sandwiched between some very traumatic events.