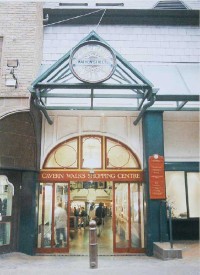 ©
Today, Cavern Walks, a popular shopping mall, stands on the former site of The Cavern Club, where the Beatles appeared 274 times.

Although he would join his friends on stage on a few more occasions, bassist Stuart Sutcliffe's decision to remain with girlfriend Astrid Kirchherr in Hamburg after the group's 1960 German tour meant that he had effectively left the Beatles.

His reasons for this were two-fold. First, he obviously wanted to spend more time with the new love of his life; and second, while it had been John Lennon who had asked him to join the band in the first place, it was also John -- together with Paul McCartney -- who mercilessly criticized his poor bass playing and made fun of him in public.

This kind of behavior was not unusual, for while John's rapier-like wit could make even the most mundane situations appear funny, he would also use it to devastating effect to embarrass many of those who were closest to him.

"He could destroy people with his verbal wit," asserts his former college friend, Bill Harry. "He'd do this all the time, and it surprised me the way he used to be cruel with Stuart, because I knew how close they were. He'd really put him down, and he'd put down anyone -- including Cynthia -- if he had the opportunity. If you were the sort of person who'd let him get away with it, he'd be quite cutting -- especially after a few drinks -- and that made some people frightened of him, but most of it was show.

"There again, many people also didn't catch onto his bizarre sense of humor, but in my case I loved it, I understood it. That's why I asked him to show me some of his poetry, which I'd heard about. At first, I got the impression that he was reluctant to do so, because poetry wasn't the sort of thing that a macho guy from the North [of England] would write! So when he did show me one of his poems, he was really surprised at how much I liked it."

At around this time, Bill was planning to start Mersey Beat, a biweekly newspaper dealing with the then-thriving rock (or "pop") music scene in the area. Each issue would contain news items, record reviews, concert listings, and feature stories about -- or interviews with -- the various artists in and around Liverpool. Taken by the offbeat humor of John's poetry, Bill asked him to contribute a piece to the first issue, and John responded by coming up with "Being a Short Diversion on the Dubious Origins of Beatles," a brief tale describing, in John's own irresistible style, how his group had been formed.

Bill was delighted with the article, and John was delighted with his reaction, so much so that soon afterwards he walked into the Mersey Beat offices and handed the editor a bundle of more than 250 cartoons, drawings, poems, and short stories -- enough Lennon material to satisfy even the most impatient reader.

In the meantime, two very important events had taken place: During February and March 1961, The Beatles had started playing regularly at The Cavern Club, the venue which would become synonymous with their name in the years to come, and in May, during their second trip to Hamburg, they had made their first professional recordings.

Richard Buskin A Cavern Club membership card from 1964. If the bearer hoped to use it to catch the Beatles, he or she was out of luck; the group did not perform there after 1963.

With Bert Kaempfert producing, they backed singer Tony Sheridan on three songs, taped a Lennon-Harrison instrumental entitled "Cry For A Shadow," and performed their own rock arrangement of the old Eddie Cantor favorite, "Ain't She Sweet." John sang the lead vocal on this and, even at the age of 20, the unmistakable, raw-throated Lennon delivery was clearly shaping up.

Later in the year, two weeks before his 21st birthday, John was given a £100 cash gift by his Aunt Elizabeth in Scotland, prompting him and Paul to immediately spend the lot on a two-week vacation in Paris. While there, they hung around the various cafes, clubs, and bars, and also met with a friend of Astrid's, Jurgen Vollmer.

Jurgen was sporting a strange hairstyle, with his hair combed forward over his forehead, similar to that adopted by Stuart Sutcliffe when the Beatles had last seen him in Germany some months before. At that time, John had viewed this -- in addition to the Astrid-inspired all-black look, complete with leather pants -- as yet another opportunity to publicly put Stu down. Now however, with persuasion from Jurgen, John and Paul decided to follow the fashion. John's days of Teddy boy style, with its slicked-back hair and long coats, were finally over; he was now a "moptop."