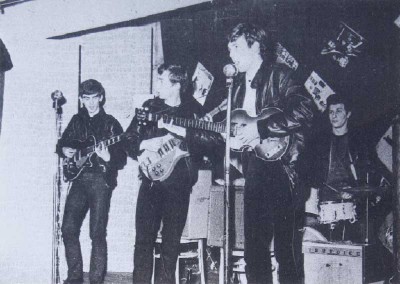 George, John, Paul, and Pete play for just 18 people who turned out to see them at the Palais Ballroom in Aldershot, southern England, on December 9, 1961.

Not content with simply jumping around the stage like a cross between Elvis, Little Richard, and Jerry Lee Lewis, John Lennon in his early performing days decided that it would also be fun to really intimidate his postwar German audiences, and force them to swallow their already-bruised national pride.

It may have been 15 years since the Second World War, but the ever-sensitive John wasn't prepared to forgive his audience for the crimes that their nation had committed, nor was he about to let them forget. Comments such as "What did you do during the war?" and "Get back to your tank" soon became part of his on-stage patter, and in case anyone couldn't understand or hear him above the general noise, he would press the point home by goose-stepping up and down, calling them "Bloody Krauts" and shouting "Heil Hitler!"

Needless to say, the customers were not charmed by this sort of behavior, but still they loved the raw brand of rock 'n' roll that they were hearing, and they would try to encourage more of the same by sending crates of beer up onto the stage.

Mixed with pep pills supplied by the club's waiters, this helped the Beatles endure the exhausting six-hour sessions that they would sometimes have to play. Additionally, it gave John added confidence with which to face his "fans"; on at least one occasion he walked on stage wearing just a swimming costume and a toilet seat around his neck!

Aside from all the frivolity, however, there were also many benefits that the early Beatles were gaining from their time in Hamburg. As human beings, the incredible things that they were seeing, hearing, and experiencing were causing them to grow up overnight; as performers, the long hours and demanding audiences were teaching them to play more tightly as a band, improving their musicianship and hardening their voices.

During this period, John's friendship with Beatles bassist Stuart Sutcliffe became stronger than ever. Stu met and fell in love with Astrid Kirchherr, a 22-year-old designer and photographer whose stunning wardrobe sense -- all-black suede jacket and leather skirt -- and strong opinions on fashion, art, and music were to have a profound effect on all of the Beatles over the course of the next two years.

Astrid's beautiful blonde looks naturally caught John's eye as a Brigitte Bardot look-alike, but it was her intellect and her friendly willingness to listen to whatever he had to say that most attracted him to her. The fact that she was Stuart's girlfriend ruled out any possibility of a romantic relationship between them, but John still spent a great deal of his spare time with the couple, talking, drinking, and investigating Astrid's large collection of classical books.

"John had this knowledge of everything that surrounded him, because he had particularly high intelligence," Astrid told Ray Coleman. "But he didn't have much experience, and he was so nosey ... I thought of him as a gentle, sentimental boy who was in such a hurry to find out about everything. Stuart was the same, but really he had a deeper natural intelligence than John. When they were together, it was very powerful for them both."

Soon, however, the first Hamburg trip ended in disarray after the Beatles broke their contract with The Kaiserkeller by playing at the rival Top Ten Club. George Harrison, reported to the authorities for being under-age, was deported, as were Paul McCartney and Pete Best for supposedly setting fire to the wallpaper in their grubby living quarters. Stu decided to stay on with Astrid, and so it was a very depressed John who set out alone for the return trip to England on December 10, 1960.

Yet more than 500 hours of playing, crammed into little over three months, had left their mark, and when the Beatles appeared at the Town Hall Ballroom in Litherland, Liverpool, on December 27, they experienced the first stirrings of what would later come to be known as Beatlemania. The audience, swept away by the band's new-found magnetism, rushed forward to the front of the stage, and all at once the no-hopers had been transformed into local heroes.

The next 18 months would not be without their fair share of letdowns, but for John, who was hanging all of his hopes on the group's fortunes, there was now at least some light at the end of the tunnel.