John Lennon and the Birth of The ''Beatals'' 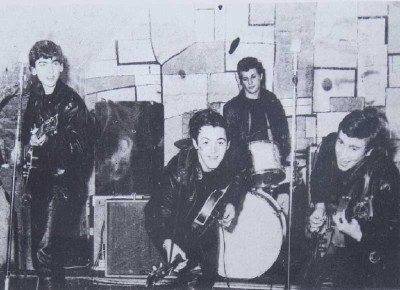 Giving it all they’ve got, on stage at The Cavern Club, 1961. The band's trip to Germany helped them learn how to perform on stage.

As a young John Lennon's art studies went from bad to worse, so he became more ambitious for his band, and through the first half of 1960, thanks largely to the efforts of local businessman Allan Williams, more and more engagements -- including a tour of Scotland, backing singer Johnny Gentle -- were being secured.

By this time, schoolmate Stu Sutcliffe had joined the group, persuaded by John to spend the then-enormous sum of £65 that he had earned from one of his paintings on a brand new bass guitar. The fact that he had no idea how to play the instrument was irrelevant; he was John's friend, John wanted him in the group, and that was that. Stu duly reciprocated by coming up with the name of the "Beatals" as a replacement for the outdated Quarry Men. Over the next few months the name would change to the Silver Beats, the Silver Beetles, the Silver Beatles and, by the middle of August 1960, the Beatles.

This same month, Pete Best was recruited as drummer, the first to fill the post on a permanent basis since Colin Hanton had quit the group the previous year. So it was that the first proper Beatles lineup featured John, Paul McCartney, and George Harrison on guitars, Stu on bass, and Pete on drums when the band turned up for a two-month stint at the newly opened Indra Club in Hamburg, West Germany, on August 17, 1960.

John by now had come to the end of his course at the Art College, after failing his lettering exams. For months, his Aunt Mimi Smith had pleaded with him to give up the guitar and concentrate on the drawing that he was good at, but the reply, according to Ray Coleman's book, John Winston Lennon, was always the same: "I'll be OK, I don't need the bits of paper to tell me where I'm going." Sure enough, he was heading for Hamburg and, he hoped, the big time.

Allan Williams was again responsible for setting up the booking, having already enjoyed considerable success with his placement of the far more accomplished Liverpool group, Derry and the Seniors, at The Indra's sister club, The Kaiserkeller. The Beatles would, in fact, play both venues between their late-summer arrival and November 30, and although they would have to put up with poor money, terrible accommodations, and very demanding hours, Hamburg would prove to be a major turning point.

The Indra and Kaiserkeller were situated on the Grosse Freiheit, in the heart of the dock city's red-light district, an area populated by pimps, prostitutes, sailors, and an assortment of others visitors in search of "a good time." Everywhere the Beatles turned they saw neon signs that pointed them in the direction of bars and strip joints, while half-naked women paraded up and down, displaying the ample goods that they had to offer. What's more, it was these kinds of people -- a combination of thugs, villains, and down-and-outs -- who made up a large proportion of the audiences that the Liverpool boys would have to perform to every night.

The group's stint at The Indra lasted only a few weeks before the seedy strip-palace-turned-rock-club was closed down by its owner, Bruno Koschmider, owing to lack of business and complaints about noise. The Beatles then moved to The Kaiserkeller, an altogether different proposition. Far more people packed themselves into this much larger venue, and apart from being slightly overwhelmed by all this, the band also felt lost in the middle of what seemed to be a huge stage; huge, that is, compared to anything that they had played on before.

After observing the stiffness of their stage movements -- what there was of them -- Allan Williams repeatedly told the inexperienced entertainers to "make a show," and he was promptly imitated by both Koschmider and the customers, who would also urge them to "mak show." For John, this was a license to go completely wild; if it was a show they wanted, then it was a show they were going to get!