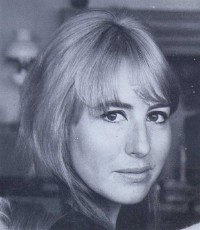 When the “posh Miss Powell” embarked on a relationship with Lennon the Teddy boy in 1958, little could she have realized how her decision would forever change the course of her life.

For most of the first year at the Liverpool College of Art, Cynthia Powell had been keeping an eye on John Lennon from across the room that they both sat in, during the weekly lettering classes. Having watched his crazy antics and laughed at his outrageous jokes, she soon found herself hopelessly drawn to this unruly Teddy boy. He, on the other hand, hardly seemed to notice her, but in time this would change, for if there was ever a case of opposites attracting, then this was it.

As signified by her gentler, more refined accent, Cynthia did not live in Liverpool itself, but in Hoylake, a very respectable middle-class area situated on the Wirral, on the other side of the River Mersey. She was a shy, well-mannered girl, conscientious and hard-working.

Her appearance ensured that she merged quietly into the background: modest tweed skirt and short, permed hair: As she herself observed in her 1978 book, A Twist of Lennon, "The only thing that John and I had in common was that we were both as blind as bats without our glasses. ... He lived in a different world to me."

At first, John's only recognition of her came in the form of mocking the "posh" way in which "Miss Powell" spoke. He began to take more notice, however, when she allowed her hair to grow long and straight, and then dyed it blonde, making her more closely resemble the woman of his dreams, French film star Brigitte Bardot. Cynthia, for her part, was initially just amused by John's wild and often hilarious behavior, but within no time her interest turned into infatuation.

Needless to say, this was totally against the best advice of her friends, who saw her as less than well suited to that loudmouthed layabout, Lennon. His friends weren't too enthusiastic either; what did he see in that cool, snooty career girl from over the water?

Yet in spite of everyone's better judgment, the two finally broke the ice at a college party in the summer of 1958, just before the end of the academic year. They danced together and Cynthia was in seventh heaven, but when John asked her out her panicky response was to blurt out, "I'm awfully sorry, I'm engaged to this fellow in Hoylake." John snapped back, "I didn't ask you to marry me, did I?"

Having got these pleasantries out of the way, Cynthia allowed fate to take over, and she and her girlfriend joined John and his cronies at the local pub. Several drinks later, the two girls found themselves sitting alone at a table while the guys stood and talked at the bar.

Cynthia, sensing that the whole episode had just been a cheap joke at her expense, decided to make a swift and silent exit. Just as she reached for the door, however, she could hear John's gravelly voice boom out above the noise of the crowd, "Didn't you know Miss Powell was a nun, then?"

"I was dragged back into focus and persuaded to stay," she recalled in her book. "How could I resist?" Well, she didn't, and for all of the highs and lows that she was to experience as a result of this momentous decision, it was one that she has never regretted.