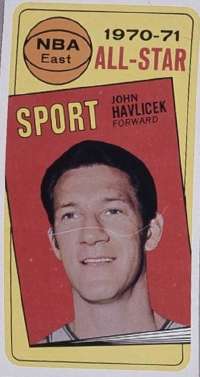 John Havlicek’s stamina was off the charts. He logged 45.4 minutes a game in 1970-1971. See more pictures of basketball.

John Havlicek played 16 seasons with the Boston Celtics. He scored 26,395 points, made first-team All-NBA four times, contributed to eight championship teams, and was elected to the Basketball Hall of Fame in 1983. Not bad for a guy who took seven seasons to crack the starting lineup.

Havlicek was good enough to start sooner, but because he was so effective as the sixth man -- giving his team a burst of energy when the starters sagged -- Celtics coaches Red Auerbach and Bill Russell saw little reason to mess with a good thing. "Guarding John Havlicek is the most difficult job I have in a season," said Bill Bradley. "Havlicek's every movement has a purpose."

Born and reared in the steel and coal country of eastern Ohio, Havlicek had an easy way with sports. He excelled at baseball and basketball and was an All-State quarterback at Bridgeport High, from which he graduated in 1958. At Ohio State University, he stuck to basketball -- to the dismay of Buckeyes football coach Woody Hayes. Despite four years away from the gridiron, Havlicek was selected by the Cleveland Browns in the seventh round of the 1962 NFL draft.

The Browns wanted him to play wide receiver. He survived until the last cut of training camp. Havlicek's mother was Yugoslavian, his father Czechoslovakian. Some people struggled to pronounce his name. A fellow high school player dubbed him "Hondo" because, said the player, Havlicek resembled John Wayne, star of a Western movie by the same name. The nickname stuck.

Havlicek didn't invent the role of sixth man -- the Celtics' Frank Ramsey was a super-sub in the late 1950s -- but he did pioneer the role of the NBA small forward with his ability to counteract bigger players in the front court. "Havlicek is one of those rare players who force rivals to alter their regular methods in deference to him," wrote Sports Illustrated's Frank Deford in 1966.

"Havlicek is 6 feet 5 1/2 and weighs 205 pounds, and he has unusual speed, strength and agility for a man that size. He is too fast for most forwards and too big for most guards to cope with."

In addition to his versatility, Havlicek had incredible stamina. Late in the game, when other players began tugging at their shorts, Hondo continued to go full bore.

Opponents and fans marveled at how he never seemed to break a sweat. Away from the court, Havlicek had a reputation for clean living. He didn't smoke, he seldom drank, and he was habitually organized. He kept his body in peak condition and rarely missed a game.

He began his NBA career in 1962, on a team that included Russell, Bob Cousy, K.C. Jones, and Sam Jones among its members. He hustled his way into the hearts of Celtics fans in 1965 when he stole Hal Greer's pass in the Eastern Conference finals against Philadelphia, securing victory for Boston. "Havlicek stole the ball!" rasped Celtics announcer Johnny Most. "Havlicek stole the ball!"

As the Celtics nucleus aged, Havlicek's responsibilities increased. When Tom Heinsohn replaced Russell as coach for the 1969-1970 season, Havlicek moved into the starting lineup. That season he led his team in scoring, rebounding, and assists -- an extremely rare feat in the NBA. Hondo led the league in minutes played the next two seasons while averaging 28.9 and 27.5 points, respectively.

Boston's 1972-1973 team, featuring a front line of Havlicek, Dave Cowens, and Paul Silas, was among the best in franchise history, winning 68 games during the regular season. But Havlicek suffered a shoulder injury in the third game of the Eastern finals, opening the door for the New York Knicks, who won the series in seven games. Boston bounced back with championships in 1974 and 1976. Havlicek played two more seasons before hanging it up at age 38. He had become the first player to score 1,000 or more points 16 consecutive seasons.

It was April Fools' Day, 1973, and the joke was on the Atlanta Hawks in Game 1 of the Eastern Conference semifinal playoff series. Boston had defeated Atlanta five times in six tries during the season, and it had won 24 of its last 26 games leading up to the playoffs.

Led by Havlicek, the Celtics put on a fastbreak clinic, overwhelming the Hawks 134-109. Hitting all manner of transition baskets and draining his patented lean-in jump shot, Havlicek scored 54 points, then the fourth-best effort in NBA playoff history. He tallied 24 field goals, a playoff record that's never been broken.