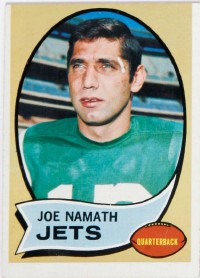 Joe Namath and the Jets stunned the Colts in 1972  with six touchdowns and  496 passing yards to win the game. See more pictures of football players.

Joe Namath was just presented the professional football's Player of the Year award from the Miami Touchdown Club. Suddenly, a fan yelled that the Baltimore Colts were, in so many words, going to beat the Jets in the upcoming Super Bowl. Namath responded by saying, "We're going to win Sunday. I guarantee you."

Most of the media dismissed the remark as just another case of Broadway Joe's notorious bravado. It wasn't.

"A lot of us felt we weren't getting respect," he said. "We were tired of hearing that stuff." The Jets were 191/2-point underdogs going into Super Bowl III.

One of the most sought-after athletes ever to come from the college ranks, Namath led the University of Alabama to three banner seasons during which they lost only three regular-season games.

Alabama coach Bear Bryant called his star quarterback "the greatest athlete I ever coached." Joe was drafted in the first round by teams in both the American Football League and NFL.

His decision to sign with the AFL's Jets was the turning point in the costly war between the rival leagues. Eighteen months later, a merger was in place.

The slope-shouldered quarterback amassed 300- and 400-yard games when such accomplishments weren't so commonplace. He registered six 300-yard games in 1967, four in 1968, and three more in 1969.

He passed for more than 3,000 yards in three of his first four seasons, and in 1967 he became the first to pass for more than 4,000 yards in a season. Selected to play in five AFL All-Star Games or AFC/NFC Pro Bowls, he was inducted into the Pro Football Hall of Fame in 1985.