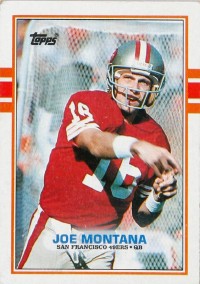 Joe Montana was the only hope for the San Francisco 49ers. The 49ers trailed the Dallas Cowboys 27-21 late in the fourth quarter of the 1981 NFC championship game.

Methodically, Joe Montana directed the 49er offense 83 yards from their own 11-yard line to the Dallas 6. With just 51 seconds remaining and under a fierce pass rush, the young quarterback fled the safety of the pocket and tossed a high, floating pass toward the back of the end zone.

Buried immediately under a mass of Cowboy defenders, Montana didn't see wide receiver Dwight Clark's game-winning grab, known today simply as "The Catch," but the roar of the crowd told him all he needed to know. The 49ers were going to the Super Bowl. It was typical "Montana Magic."

Joe Montana (born 1956) played football, baseball, and basketball for Ringold High School in Monongahela, Pennsylvania, before entering the University of Notre Dame on a football scholarship.

Although his statistics at Notre Dame weren't overwhelming, the gutsy play of the "Comeback Kid" was legendary.

Still, some questioned his arm strength, and as a result he was not selected by the 49ers until the third round of the 1979 NFL draft.

What scouts overlooked, however, was Montana's natural leadership skills and his almost eerie ability to rally his team from behind.

In fact, during his pro career -- 14 seasons with the 49ers and two with the Kansas City Chiefs -- he engineered 31 fourth-quarter comebacks.

With Montana, the 49ers made 10 playoff appearances, captured eight divisional crowns, and won four Super Bowl titles. Their 55-10 thumping of the Denver Broncos in Super Bowl XXIV earned the Niners the right to be called the "Team of the '80s."

Leading the assault, as he did in each of the 49ers' three previous Super Bowl victories, was Montana, who completed 22 of 29 passes for 297 yards and five touchdowns.

To no one's surprise, he was named Super Bowl MVP for a record third time. A sure-shot Hall of Famer, Montana was named in 1994 to the NFL's 75th Anniversary All-Time Team.