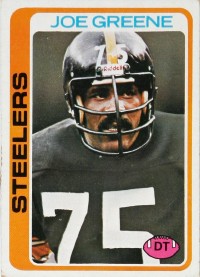 Joe Greene was a big and scary player, but also a bright and friendly fellow. See more pictures of football players.

"Joe who?" asked disappointed Pittsburgh fans when the Steelers made Joe Greene, the defensive tackle from North Texas State, their No. 1 draft pick in 1969.

Although the new guy had been a consensus All-American, his reputation hadn't made much of an impression in Pennsylvania.

Told he was large (6'4", 260 pounds) and had a colorful nickname ("Mean Joe"), fans were still unimpressed. They'd wanted a "name" player at a skill position.

Greene (born 1946) became a "big" name in Pittsburgh from his first game. In fact, the lowly Steelers had never had such a dominating lineman. Few, if any, teams ever have.

Although the rebuilding Steelers under first-year coach Chuck Noll won only a single game in Greene's rookie year, he was the best lineman on the field in nearly every game.

Big, fast, smart, and determined, Joe was the rock that the Steeler dynasty of the 1970s was built upon. The "Steel Curtain" defensive line of L. C. Greenwood, Dwight White, Fats Holmes, and Greene became one of the NFL's legendary foursomes. Greene was named Defensive Rookie of the Year in '69, NFL Most Valuable Defensive Player in both 1972 and 1974, and a 10-time Pro Bowler.

But his most telling awards were the four Super Bowl rings he and his Steeler cohorts earned during the 1970s.

Ironically, Greene never liked the "Mean Joe" nickname that became so famous, nor could it have been further from the truth -- at least off the field. Out of uniform, Joe was a bright, articulate, friendly fellow whom NFL commissioner Pete Rozelle once described as "one of our thinking players." A famous TV commercial in which he gave his game jersey to a young fan who'd shared a soft drink with him was very near the real Joe Greene.

On the other hand, NFL players who only knew Greene from on-the-field meetings had no trouble at all believing his nickname. Some even muttered it in their sleep.