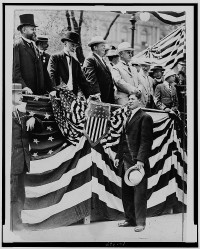 Jim Thorpe was probably the  best all-around kicker of his  time. Punt, place kick, or  drop kick, he could do it all. See more pictures of football.

When Jim Thorpe won both the decathlon and pentathlon in the 1912 Olympics at Stockholm, Sweden's King Gustav proclaimed the obvious: "You, sir, are the greatest athlete in the world." Thorpe replied, "Thanks, King."

Of mixed Irish, Sauk, and Fox ancestry, Thorpe (1888-1953) was born in what is now Oklahoma, but when he was 16 his father sent him east to Carlisle Institute in Pennsylvania, the famous school for Indian youth.

There, under legendary coach Glenn "Pop" Warner, he first achieved football fame in 1908 with a pair of long touchdown runs in Carlisle's tie with powerful Penn. But Thorpe was an indifferent student. He dropped out of school in 1909 and, among other things, played some semipro baseball.

Lured back to Carlisle in 1911 by Warner, Thorpe became a two-year All-American and experienced his Olympic triumphs. But shortly after the 1912 football season, knowledge of Thorpe's baseball days surfaced. He was declared a professional, and the Olympic Committee demanded he return his medals. (They were restored to his family in 1982.)

Although he played six seasons of major-league baseball, football was Thorpe's game. In 1915, the Canton Bulldogs offered him $250 a game at a time when few stars could command even $100. With Thorpe as star and coach, the Bulldogs won the U.S. professional championship in 1916, 1917, and 1919. His presence moved pro football a giant step forward in the public's estimation.

Thorpe could do everything: plunge through lines, outrace pursuers, and throw and catch passes. He was an outstanding punter and such a deadly kicker that he gave pregame exhibitions -- place-kicking field goals from the 50-yard line, then turning and drop-kicking through the opposite goal posts. He was such a punishing tackler that opponents accused him of wearing sheet metal in his shoulder pads.

When the NFL was formed in 1920, Thorpe was named its first president, though more for his name than his executive ability.

Thorpe still gets votes as the greatest athlete of the 20th century. Who else was an Olympic champion, a major-league baseball player, and an All-American and All-Pro in football?