by the Editors of Publications International, Ltd. Aug 3, 2007 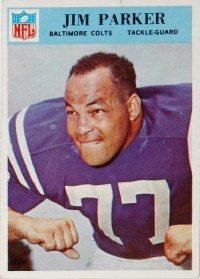 Jim Parker retired after a 1967 knee injury so as not to hurt the team by taking up a roster spot. See more pictures of football.

Jim Parker was called "Johnny Unitas's bodyguard." As soon as he joined the Baltimore Colts in 1957, he learned the "one big rule" -- protect the team's great passer. Coach Weeb Ewbank told him bluntly: "You can be the most unpopular man on the team if the quarterback gets hurt."

Parker (born 1934) always maintained his popularity with his teammates, although quite a few defensive linemen around the NFL were less than fond of him.

At Ohio State, the 6'3", 275-pound Parker was a two-way player and winner of the 1956 Outland Trophy as the nation's outstanding lineman.

When the Colts drafted him No. 1 in 1957, most observers expected Baltimore to plug him into its defensive line. At OSU, famous for its "three yards and a cloud of dust" running attack, he had little chance to pass block, a skill essential for a pro offensive lineman.

However, coach Ewbank placed him at offensive left tackle, the key position in protecting Unitas from "blind side" blitzers. In Parker's first game, the Colts threw 47 passes -- "more that day than we did all my four years at Ohio State," Parker remembered.

Big Jim quickly mastered the intricacies of pass blocking. By the end of his rookie year, The Sporting News named him to its All-Western Conference team.

After several years as an All-Pro tackle, Parker was switched to left guard, a completely different position requiring him to pull and lead-block on outside running plays.

Parker put together an unusual eight-year streak as an All-Pro performer -- four years as a tackle and four more as a guard. He was also chosen to eight Pro Bowls.

Six years after his 1967 retirement, he was inducted into the Pro Football Hall of Fame as the first "pure" offensive lineman to be so honored.

When a 1967 knee injury failed to respond, Parker might have hung on through the season collecting paychecks. Instead, he retired so as not to hurt the team by taking up a roster spot.