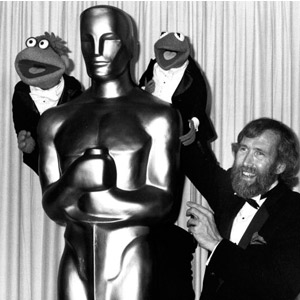 Part of the Muppets' appeal was that Jim treated them like real people when he took them out in public (like here, at the Academy Awards ceremony in 1983).
Ron Galella/WireImage/Getty Images

Henson was always a creative trailblazer, and his outside-the-box thinking contributed to the Muppets' enduring popularity. When he started "Sam and Friends," puppets were typically made out of very stiff material and were either straight hand puppets or marionettes. When he built the puppet that would later become Kermit the Frog (initially an abstract, lizard-like creature), he used foam rubber for the body. This gave it more flexibility and allowed the puppeteer to be more expressive. The foam-rubber (later reticulated polyfoam, which doesn't disintegrate over time) body became the basis for most future Muppets.

Another of Henson's puppet innovations had to do with the removal of the stage or wall that hid the puppeteer from the audience. Although some mechanism for hiding the performer was necessary in live puppet shows, it wasn't always in television -- the television was the "stage." Henson eventually used a technique on "The Muppet Show" called "platforming up," in which the sets were built up high so that the performers could stand at full height (although in many cases, they had to twist into various positions to prevent from being seen). The camera framed the Muppet action above, and the Muppets could move freely about in their space. This was difficult for the performers, who had to view their puppet's actions in a monitor.

Henson and his builders were quick to make use of growing technology to make the Muppets more lifelike as well. Remote controls were employed to make ears and eyebrows wiggle. Kermit and the Muppets did things that puppets had never done before, such as driving cars (which involved using a little person to drive from the trunk) and riding bicycles (accomplished by marionetting from a crane above). Near the end of Henson's life, Henson Productions was working on a system that would allow a single puppeteer to control multiple animatronic characters. Known as the Henson Performance Control System, it would eventually win an Academy Award.

Henson also made it a point to treat his Muppets as real characters when they were out in public -- not just as puppets -- which led other people to do the same. Kermit made talk show and game show appearances alone, and he also guest-hosted "The Tonight Show" and "Larry King Live." The combination of more flexible materials in the construction of the Muppets (allowing them to move freely in space) and treating them like people made them more accessible to their audience -- which was Jim Henson's goal all along.

Speaking of which, on the next and final page, we'll examine the profound impact that Jim Henson had -- and continues to have -- on the world of puppetry and audiences everywhere