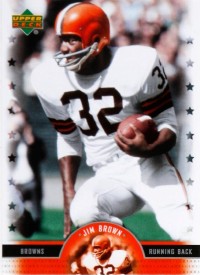 Jim Brown was a great athlete andactor, but he was also an involved human rights activist. See more pictures of football.

Every couple of years, when some young turk is tearing up NFL gridirons, someone polls various experts to name "the greatest runner of all time, and the consensus is always the same -- Jim Brown.

Paul Brown, his coach with Cleveland from 1957-62, said: "As a pure runner, Jim Brown was the best ever. He had a combination of power, intense speed, and a shuffling foot action that made it difficult to stop him.

After an All-American senior season at Syracuse, Brown (born 1936) was Cleveland's first draft choice in 1957, but only because the quarterback they coveted had already been picked.

Brown led the NFL in rushing as a rookie, a feat he would accomplish in all but one of his pro seasons. In seven of his nine seasons, he rushed for over 1,000 yards even though the NFL played only 12-game seasons until 1961.

Despite consistently leading all rushers in attempts, he was never seriously injured, not only because of his remarkable durability but also because of his intelligence; he always knew where everyone was on the field and thus knew exactly where a hit was likely to come from.

Eventually, he and coach Brown disagreed over Cleveland's carefully scripted offense. Jim believed the attack had become too predictable. When Blanton Collier replaced Paul Brown as Cleveland coach in 1963, he installed a "run-to-daylight" offense that gave Jim more options. Brown responded with his greatest season -- 1,863 rushing yards. In 1964, Cleveland won the NFL championship, then followed with a division title the next year.

When Jim retired from football to pursue a movie career before the 1966 season, he held most of the NFL's career and single-season rushing records. Though others with longer careers and 16-game seasons have surpassed his career totals, his lifetime 5.2 average per carry is still the best in NFL history. No other player with more than 1,000 carries has cracked the 5.0 barrier.