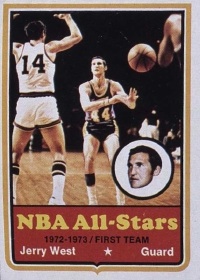 So synonymous is Jerry West with the NBA that the league's official logo features his likeness. West and the NBA have gone hand in hand for more than three decades, from the day he joined the Los Angeles Lakers as a raw-boned rookie in 1960 until the present, as he presides over the Lakers as their general manager. In between, West played 14 seasons, amassed 25,192 points, went to nine NBA Finals, was elected to 14 All-Star Games, and suffered a broken nose at least nine times. He even coached L.A. for three seasons and was successful in that endeavor, too.

West acquired several nicknames over the years. First he was "Zeke from Cabin Creek," a jab at his humble origins in West Virginia coal country. He was "Mr. Clutch," a reference to his exploits under pressure. And he was "Mr. Outside," the jump-shooting complement to fellow Lakers superstar Elgin Baylor, "Mr. Inside."

West had tremendous range on his shot, a hair-trigger release, and deadly accuracy. He made nearly half of his field-goal attempts for his career, many coming from beyond what now is the 3-point line. West was no one-dimensional gunner, however. He drove to the basket with authority and routinely ranked among the league leaders in free-throw attempts. He defended tenaciously, earning a spot on the All-Defensive Team four years running. And he was a willing passer, once leading the NBA in assists. Rebounds? He had more than 5,000 of those.

West was born May 28, 1938, in Chelyan, West Virginia, which bordered Cabin Creek. Jerry grew up practicing basketball on a dirt surface until his hands cracked and it was too dark to see. He often practiced alone, and that was fine with West, a shy and modest kid who dreamed of following the legendary Hot Rod Hundley to the University of West Virginia and into the NBA. After leading East Bank High School to the state championship in 1956, West had his pick of colleges but stayed true to his Mountaineers.

Though just a shade over six feet in high school, West jumped exceptionally well. He liked to lurk under the basket until the other team attempted a layup, then spring up and swat the ball off the backboard, a legal maneuver in those days. As a 6'2'' senior at West Virginia, he averaged 16.5 rebounds per game from his forward position. He didn't become a guard until his first year with the Lakers.

West was voted the outstanding player in the 1959 NCAA Tournament after he scored 160 points in five games. The Mountaineers, however, lost to California in the championship game. In 1960, West co-captained the U.S. Olympic team in Rome. The Lakers, moving from Minneapolis to Los Angeles for the 1960-61 season, grabbed him with the second pick in the 1960 draft, after Cincinnati took Oscar Robertson. For their coach, the Lakers tapped Fred Schaus, West's mentor at West Virginia.

West played tentatively early in his rookie season and didn't crack the starting lineup until midseason. But he worked hard during the ensuing summer to develop his left-handed dribble. He began driving more, which created more openings for his jump shot, and his scoring average shot up from 17.6 to 30.8, fifth best in the NBA. He and Baylor were hailed as the greatest one-two punch in history, and the Lakers were being forecast as the NBA's next dynasty.

The dynasty never materialized because of the Lakers' repeated failures in the NBA Finals. In 1962 against Boston, the Lakers went up two games to one when West scored a last-second basket after stealing the ball from Bob Cousy. But Boston won Games 4 and 6 in Los Angeles and Game 7 at home to deny the Lakers. Los Angeles returned to the Finals in 1963, losing to Boston in six games, and 1965, again losing to Boston, this time in five. In 11 playoff games that year, West averaged 40.6 points. Unfortunately, Baylor was out because of an injury.

In 1968, the Lakers acquired Wilt Chamberlain to get them over the top. They roared into the Finals and took the first two games from the Celtics. Then they crashed, eventually losing Game 7 at home. West was sensational, with games of 41, 42, and 53 points and a triple-double in Game 7. He was named Finals MVP.

In 1970, the Lakers again lost in seven games, only now the opponent was the New York Knicks. West hit one of the most memorable shots in basketball history, a 55-footer to send Game 3 into overtime. But for the seventh time in nine years, his team came up short in the Finals. Finally, in the 1971-72 season, with West leading the NBA in assists, the Lakers exorcised their demons. They won a league-record 33 consecutive games, set a record with 69 wins, and flattened New York in the Finals.

West played two more seasons before retiring in 1974 at age 36. After a couple of years dedicated to golf, travel, and taking stock of his life, he returned to coach the Lakers in 1976. He moved into the front office in 1979 and was elevated to his current position in 1982. During his tenure as general manager, the Lakers captured six championships and missed the playoffs only once. West later took over the general manager duties for the fledgling Memphis Grizzlies franchise, but he left the club in the same straits it began in despite pushing the club into the postseason for the first time in its history.

West has the fifth-highest scoring average (27.0) in NBA history, and he was elected to the Hall of Fame in 1979.